'It's sabotage,' says ActionSA as battle with IEC goes to court 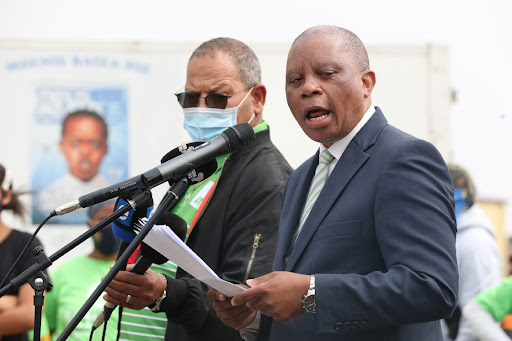 ActionSA is taking the IEC to court over the omission of its name from ballot papers for the November 1 elections.
Image: Veli Nhlapo

Political newcomers ActionSA have taken their ongoing battle with the IEC to the Electoral Court.

The party is angry about the omission of its name on the final draft ballot papers to be used in the November 1 local government elections, and has headed to court on an urgent basis.

It wants the court to compel the commission to set aside its decision, destroy the ballot papers and reprint new ones — and that the new papers must reflect ActionSA's name next to its logo, as it claims that its constitutional rights and those of potential voters was being violated by the omission.

Senior counsel Wendel Bloem said on Wednesday that papers were filed overnight and the party anticipates getting its day in court soon.

The commission has previously put the blame squarely on ActionSA, arguing it had failed to add its “abbreviated name” when it initially registered as a party.

“The absence of the abbreviated name of ActionSA on the ward ballots is because, at the point of registering as a party, ActionSA elected not to register an abbreviated name or acronym. ActionSA, in their documents in which they applied for registration as a political party, and which must be publicly lodged in terms of the regulations, responded with a 'Not Applicable' in the space where the political party was required to indicate its abbreviated name,” said IEC spokesperson Kate Bapela.

In the party’s defence, president Herman Mashaba argued ActionSA does not have an abbreviated name because its full name was already compliant with the IEC’s 8-character limit on abbreviated party names and thus could always be used in full.

ActionSA national chairperson Michael Beaumont made a similar contention, arguing that the forms it was presented with made no mention of what would go onto ballot papers.

“In section 15 of the Electoral Commission Act, it says abbreviated name, if any. In other words, both these forms, and the law envisions a situation where a party might choose not to be abbreviated.

“We understand that to mean that we have chosen an eight-character name, please use ActionSA whenever you represent the name of the organisation. What the IEC is saying is, by arguing that, we waive the right to exist on the ballot paper by name.

“There is nothing in law or form that says this is how a ballot paper is constructed, so that there may be ambiguity we accept — but when it's raised with the IEC immediately, at a time when it's easy to remedy, and the answer is no, where is the voter in that decision?” argued Beaumont.

The party says if the error is not fixed, it will not only affect the ability of its potential voters to make the right choice, but the overall free and fair election, as required by the law.

The IEC has maintained that ActionSA is not the only political party in this predicament, arguing that 14 other parties are too. Beaumont said this too was appalling.

“Organisations that have been around for relatively less lengthy periods of time are harder to identify and that is why they cannot be impeded by having the most important identifier omitted,” he said.

It is the second time in recent weeks that the party finds itself at odds with the commission.

Last week, it discovered that some of its candidates had not been included on the ballot papers — an error which was fixed in a matter of hours.

Despite this being corrected, Mashaba has accused the commission of sabotage and vowed to intensify its campaign.

“We are going to work very hard,” he added.

The party also wants a cost order against the IEC, because it has been “unreasonable”.