Niehaus will have to produce record of work he did for the ANC: Pule Mabe 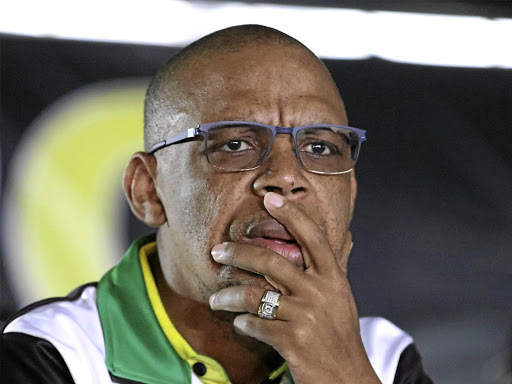 ANC spokesperson Pule Mabe has questioned the work Carl Niehaus did for the ANC. 'Does attending court ... associate with work? We see Carl Niehaus on television, we don't see him here at Luthuli House,' he said.
Image: Antonio Muchave

Dismissed ANC staffer Carl Niehaus will have to provide evidence of the work he did for the party - at least since party secretary-general Ace Magashule's suspension.

This is the view of ANC spokesperson Pule Mabe, who suggested that Niehaus, who was fired by the ANC last week, had absconded from work.

Mabe addressed journalists at the ANC's headquarters, Luthuli House, on Wednesday, shortly after Niehaus opened fraud and corruption charges against ANC leaders for the party's alleged failure to pay over Unemployment Insurance Fund contributions despite deducting them from staff salaries.

Niehaus was fired from the ANC last week after threatening to lay those charges.

“If he works in the SG's office, no problem. He then must tell the police what he did in the past 60 days or in the past 24 hours of the ANC before the letter of dismissal was written to him.

“If he works for the ANC and he works in the secretary-general's office, he must say what he does on a daily basis,” said Mabe. “Does attending court and going all over breaking Covid-19 regulations associate with work in the SG's office? We see Carl Niehaus on television, we don't see him here at Luthuli House.”

Mabe said people who worked at Magashule's office were allocated other responsibilities in the ANC after he was suspended and remained on the party's payroll. The ANC suspended Magashule in May as a result of its “step-aside” resolution which says all senior members and leaders who are criminally charged should stand aside.

“You can't abscond from work and use the fact that you work in the secretary-general's office [as an excuse]. It doesn't work like that,” he said. “The ANC doesn't pay people because it knows them by their first names. ANC pays people because they are working and they are doing something,” said Mabe.

He said the ANC understood why its employees went on a go-slow and later stayed away from work. He said their reasons were legitimate. The ANC had engaged staff representatives and understood their concerns.

“What is strange is that some of these comrades who are today opening cases against the ANC did not apply for their jobs, they were headhunted, brought in to deal with whatever situation that they might have been facing at the time. They never applied or submitted a certificate for a job.”

He said when the police investigate Niehaus' complaint, he will have to produce records to show the work that he has been doing for the party.

Mabe also suggested that the ANC's financial problems will not affect its local government elections campaign.

He told journalists not to confuse its payroll constraints as a resources issue.

“You are confusing payroll with resources required to run elections. Elections is a campaign, it is dealt with separately.

“We must never deal with matters of payroll and conflate them with the ANC,” he said, responding to a question about whether the party would be able to run a proper election campaign in light of its struggle to pay salaries.

He said the fact that the lights were still on at Luthuli House and that they still had coffee in the office showed that they were able to meet other financial obligations.

“Not being able to deal with payroll does not necessarily mean you don't have resources. It could be that at a certain given time you might not have had sufficient resources to deal with your payroll.”

Mabe said the ANC was dealing with disputes around councillor candidate lists. He said though the party had set itself a deadline of last Saturday to resolve these, it was continuing to address them as they continued to be brought forward.

“We accept that there could be legitimate concerns but we must also raise a matter of principle about ANC processes.

“There are democratically elected structures of the ANC in provinces and regions and those structures are entrusted with the responsibility of resolving issues that are happening at their level,” he said.

Some ANC members from as far as Limpopo were protesting outside Luthuli House as he spoke.