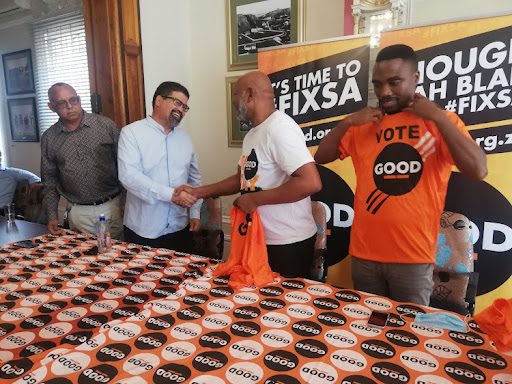 GOOD FIGHT: GOOD members, from left, Mervin Davids and Lawrence Troon, and Siyanda Mayana, right, get kitted out by party national organiser Shaun August as they were welcomed into the party in March
Image: NOMAZIMA NKOSI

The party announced eight mayoral candidates during the launch of its election manifesto on Sunday.

EP Elephants head coach Peter de Villiers was announced as the mayoral candidate for the Drakenstein Municipality in the Western Cape.

De Villiers is yet to comment on his future coaching  plans.

Addressing the media in Johannesburg, GOOD chair Sam Shabane said Troon was no stranger to leadership and was well-known in the Bay.

“Lawrence is well-known in the city and he’s ready to serve the people of Nelson Mandela Bay,” Shabane said.

On De Villiers, Shabane said: “Peter became one of SA’s most successful national rugby coaches at a time when the rugby community wasn’t ready for its first black coach.

“In his hands, the Springboks made more of a habit of beating the All Blacks than any other time.

“In 2009, he walked over the British and Irish Lions but instead of lauding him for his record, South African rugby treated him like the DA experiment.

“Peter is passionate about levelling the playing field in his hometown of Paarl and wants to build a common understanding among the people between rich and poor.”

EP Rugby’s acting president Maasdorp Cannon said the announcement was news to him and he was waiting to hear from De Villiers.

De Villiers was appointed as EP coach with much fanfare in December on a one-year contract.

“He is still contracted as far as I know.

“With the public announcement we will want to hear from Peter.”

Sources said EP Rugby bosses were  likely to meet on Monday to discuss the latest developments as they looked ahead to the new season.

Troon, meanwhile, resigned from the ANC in 2020, citing racism within the party.

In his resignation letter to Bay regional convener Nceba Faku, he said: “The complete ill-discipline and no consequences that have taken over the ANC is mind-boggling.”

He said there was a notion within the organisation that coloured people did not bring votes to the ANC.

He joined GOOD earlier in 2021 and said that he was confident of its potential to make a positive change.

While with the ANC, Troon served on human settlements, safety and security and human resources and corporate services committees.

“We will still be announcing our candidate for East London.

“We are preparing for 2024 and when the next local election comes we will participate in the whole country,” she said.

“We just had to cut our cloth according to our size.

The candidates are to lead in the implementation of the party’s manifesto.

De Lille said GOOD would focus on bringing economic, social, environmental and spatial justice to its people as its five guiding pillars.

She said the party committed to bringing achievable solutions to problems faced by municipalities and among its priorities was the breaking down of the apartheid spatial system.

“We see the sprawling rollout of RDP houses across the country but it’s just taking people further away from work opportunities.

“We have to deliver more housing fast but we also need solutions for families living on land in informal settlements.

“The solution we offer as GOOD is to take state-owned land and service it to demarcate a proper township with proper access roads and then move people from these filthy conditions in the informal settlements to giving each person a serviced plot,” De Lille said.

She said the party would further implement a free transport system for students, job seekers and the elderly to use during off-peak times.

“The only way to get rid of corrupt officials is to vote them out.

“We are saying to the voters, please lend us your vote for five years and If we don’t do as we have promised, vote us out,” she said.

She said the party would further invest in infrastructure to create jobs, support SMMEs, provide ablution facilities to informal traders and open the tender process to the public for transparency.

On the social justice front, De Lille said, GOOD would  reduce crime by fighting poverty, unemployment and drug abuse and employing more social workers in communities and in schools.

Other mayoral candidates include: