The use of rubber bullets is a human rights violation, says Malema 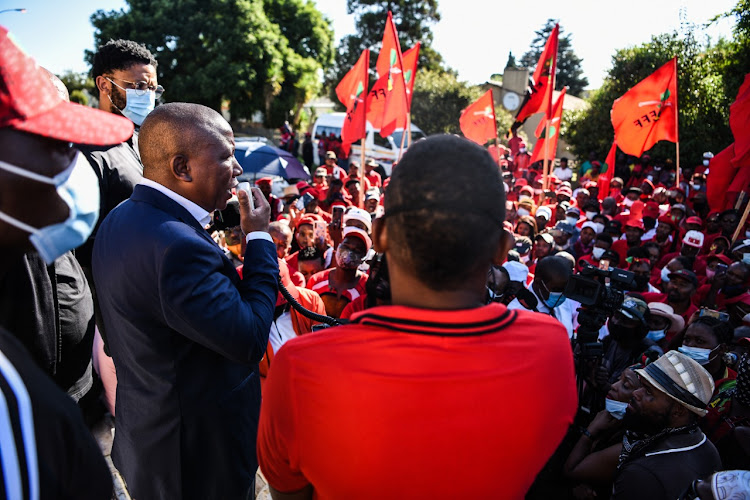 EFF leader Julius Malema on Sunday said his party will appoint a legal team to assist the family of Mthokozisi Ntumba, who was gunned down in Johannesburg during a student protest over fees, to sue the state.

“We are going to make sure that the postmortem is conducted properly.

“They might have killed him like a dog, but he will never be buried like a dog,” Malema told supporters after a visit to the distraught family at their home in Kempton Park on Sunday.

Malema said he visited the family to send his condolences and offer support. He said they were “well received” and that the family was going through a difficult time.

“We are here to say to the family they are not alone, we are with them. We are highly disappointed for what the police have done.

“They are not coping at all,” he said in a video posted on Twitter.

Don't Miss It]:CIC @Julius_S_Malema says the EFF will be approaching the Constitutional Court to declare the use of rubber bullets as unconstitutional.

Adding that he does not know why Cele is still a Minister of Police, because he does not even know who the Intelligence Head is pic.twitter.com/kpnuGP4lNI

Students took to the streets under the banner of #asinamali, protesting against the financial exclusion of those with historical debt, and fighting for first-year students who can't afford their fees.

The father of four recently obtained a master’s degree and worked at the department of human settlements in Tshwane and was responsible for about 20 projects in that city.

In a video shared on social media, Ntumba could be seen gasping for air on the sidewalk, with bloodstains on his blue shirt and blood on his face.

Ntumba visited the doctor moments before he was shot dead.

Bheki Cele, when he speaks to white people he is soft and nice, but when it comes to black people, he speaks to us like we are his children.

On Thursday, police minister Bheki Cele and top brass within the police visited the family of Ntumba.

Cele said there was “no grain of explanation” for the shooting and that someone “just went crazy”.

Ntumba’s death elicited outrage, with the police being criticised by some for using excessive force when dispersing black protesters as opposed to white protesters.

Malema said police have the “courage” to shoot at black people because “of the huge disrespect Cele has for black people”.

“The killing of one innocent soul should necessitate for the minister to step down, but in this government and this country no-one takes responsibility.

“Bheki Cele, when he speaks to white people he is soft and nice, but when it comes to black people, he speaks to us like we are his children. He is a reckless, useless minister.

“He talks to black people like we are not human beings and we don’t deserve dignity,” Malema said.

Malema also questioned why the police officers involved in the shooting had not been arrested.

“Why is there no-one in prison? We have seen the faces of the police who shot; they are suspects, they must be arrested to show that indeed the government is disappointed in what happened.

“This lip service and posturing is not going to help. Someone should be arrested. Why is there no single policeman in the cells if someone acted recklessly?”

Malema said they would also file an application in the Constitutional Court to declare the use of rubber bullets as violation of human rights.

“We need to remove the rubber bullets; there shouldn’t be bullets in a public gathering. The guns must go.

“There must be effective control mechanism to police the public, especially during a protest.”