Ramaphosa spoke but said nothing at all: opposition parties react to Sona

The fire that destroyed SA is the ANC government which allowed the looting and stealing of taxpayers' money, says the FF+ 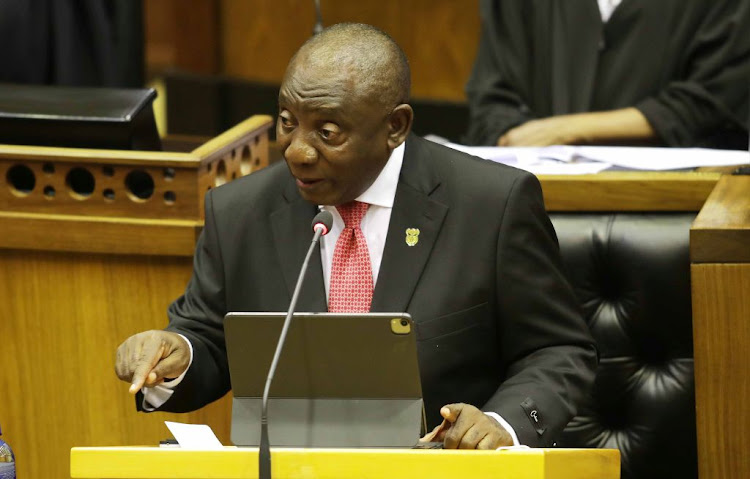 Oppostion parties on Thursday said there was nothing impressive about President Cyril Ramaphosa's state of the nation address.
Image: Esa Alexander

The FF+ on Thursday left the parliamentary precinct disappointed, saying President Cyril Ramaphosa’s state of the nation address was not realistic about the real state of SA.

Party leader and MP Pieter Groenewald said there was no detail from Ramaphosa about how exactly he saw the country achieving the plans he had set down.

“It is quite clear that the president is actually living in a dream world. He is still dreaming about smart cities, but he has lost contact and feeling with the people on the ground level and ordinary citizens of SA, where people are unemployed,” Groenewald said.

He said while it was positive that Ramaphosa referred to the rebuilding of the economy, there was really nothing new in the content.

“I wonder how many times he has used the words ‘must be done’. Yes, we agree, many things must be done — but we don’t see the results,” Groenewald said.

While Ramaphosa spoke of taking a tough stance against corruption, saying an anti-corruption body would soon be formed, Groenewald said, again, that it was a little too late, adding that looting of taxpayers' funds by government officials had been going on for too long.

“You cannot get serious about corruption when you are cosseting the very people that are implicated at the very heart of your administration,” he said.

However, Steenhuisen said it was good that the R350 Covid-19 relief grant was extended, as many citizens depended on it.

“I think there is good and bad. I think the good is the extension of the Covid relief grant to the citizens. The economy has been decimated throughout lockdown [and] for many citizens this is a lifeline that’s been keeping food on the table. So I think it's good that it's been extended.

“The bad is the president spoke about reforms again this evening. He has not tabled a single one at parliament. He didn’t give indications about when his bills are going to come to the house.

“His labour reforms that he is talking of, when they are going to see the light of day? He can talk about reforms, he can keep them on a piece of paper in a drawer in the Union Buildings [but] until he brings them to the floor of the parliament here, he is not going to get them passed.”

Steenhuisen said there was nothing new about stated reforms to rebuild the economy. He said it was also bad that Ramaphosa had failed to deal decisively with Eskom.

“And the ugly was a complete failure to deal with Eskom this evening in any comprehensive way. Hanging on to state control of the entity, not talking about the break-up that was promised many years — two Sonas — ago ... no talk about the other SOEs, he didn’t mention SAA once. This is a huge problem. We have a R300bn hole in our balance sheet and yet not a word about this,” he said.

Steenhuisen added that Ramaphosa mentioned nothing new on job creation.

“There is nothing different that he has said which was not said before. That amounts to insanity, because insanity is doing the same thing over and over again but expecting different results,” he said.

He said the number of opportunities that the president mentioned in his address were objectionable.

“We have more that 10 million people who do not have jobs and two million of those lost their jobs during the lockdown. And you would know that even before the lockdown the economy was growing in the negative. There was no expansion of the industrialised sector, there was nothing that was bringing hope that people will get out of poverty,” he said.

Ramaphosa had started his address by comparing SA to fynbos.

He said: “At least once every 20 years, fynbos must burn at extremely high temperatures to allow the ecosystem to be rejuvenated and grow afresh. Throughout the summer, the burnt foliage lies desolate. But when the autumn rains return, the seeds germinate, and its life cycle begins all over again.”

Ramaphosa said after the terrible year of 2020 where Covid-19 rocked the nation, claiming lives, causing unemployment and crippling businesses, the country would arise stronger than before.

On this Groenewald said, however, that “the fire that destroyed SA is the ANC government that allowed the looting and stealing of taxpayers' money”.

At a time when South Africans seek hope in a brighter tomorrow, tonight’s Sona represented a continuation of the Sonas of the past. More empty words without any action

Like the FF+, the newly formed ActionSA, led by former Johannesburg mayor Herman Mashaba, was left unmoved by the president’s speech.

“At a time when South Africans seek hope in a brighter tomorrow, tonight’s Sona represented a continuation of the Sonas of the past. More empty words without any action,” he said.

“While appropriate, the president’s praise of the resilience of the South African people failed to recognise government’s role in testing this resilience. It failed to deflect the fact that lockdowns were not used to equip our health systems, but rather to loot under the cover of tragedy.”

Mashaba said what stood out was Ramaphosa’s failure to give details about the vaccination programme, especially as uncertainty was rife.

Mashaba said Ramaphosa should have used the platform to show leadership and address former president Jacob Zuma’s refusal to appear before the state capture inquiry.

ActionSA maintained that for SA to be renewed, the ANC needed to be removed from power.

The IFP’s Mkhuleko Hlengwa said the address sounded like a pitch from a president gunning for re-election but while actually in government.

“It felt like we were at Sona 2020. We have heard these things before.”

“The president tonight was not very concise and very clear. Yes, obviously on the matter of vaccines he has provided much needed clarity. But the issue of employment that the president spoke about... people still don’t have employment, so we are not sure were these jobs are coming from,” he said.