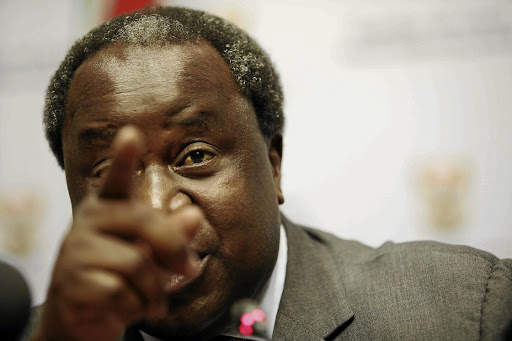 Finance minister Tito Mboweni is topping the trends list on Twitter, not for his cooking skills or shoes, but a late-night rant about “attacks on the ANC”.

The comments were made in a series of posts late on Monday night, just after President Cyril Ramaphosa and the party's national officials briefed the media on the national executive committee's (NEC) meeting held at the weekend.

The ANC confirmed that all members, including leaders at national, provincial and local government levels, who have been charged with serious criminal and corruption charges, will step aside.

Ramaphosa also said the NEC had concluded that a letter written by former president Jacob Zuma was part of a “choreographed” ploy to weaken him. He said the “choreographed campaign” against him would not distract the party from an “intensified programme against corruption and state capture”.

Mboweni said he has experienced many “ups and downs” in politics.

“I have been involved in “serious politics” for many years. I have observed and experienced the ups and downs, and dramatic and traumatic moments. Somehow, THEY ALL COME TO PASS! And life goes on!”

He said there are fundamental questions that must be asked.

He then said attacks on the ANC must stop.

These relentless attacks on our organization must stop. And ANC leaders must not feed the frenzy !! Order Comrades! We must UNITE and call young comrades like @mzwandileMasina to order! Stop Fire!! Unite!

And then referred to 'nine years of destruction'.

And this thing of some amongst us retired ones wanting to dictate from the grave is wrong! Particularly those who were party of nine years of destruction!! And they claim to have Intelligence Files! Rubbish!

Thousands of South Africans have responded, making Mboweni the top trend on Twitter for hours. Here are some of the responses.

Tito is the #Rakgadi of ANC tonight! 🙆🏾‍♂️

I was sleeping, I just heard so much noise coming from Tito's account firing shots... What's happening guys? pic.twitter.com/ZLVOCVbFaG

Since we speaking of books, i have a cooking book I can lend you. pic.twitter.com/LIIpriQQXS