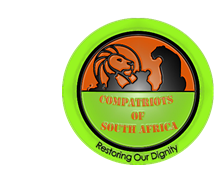 As the 2019 general elections draw closer, the Compatriots of SA has vowed to bring the forgotten people to the fore through the launch of its election manifesto in Chatty on Saturday.

The political party is hoping to garner the support of particularly coloured people through its manifesto, entitled “The Manifesto for the Forgotten People of South Africa”.

And while the party states it might not have enough votes to win, it has vowed to use its votes to ensure the voices of its supporters are heard in parliament.

According to the manifesto, the party’s focus ranges from education, health, women and child abuse to safety, fighting corruption and an inclusive economy, among other issues.

Regarding the issue of land expropriation without compensation, the party says it too believes in the concept, but not in the manner in which it is being exercised.

“We are the descendants of the Khoi, San, Griqua and Bushmen. We are unapologetically positioned for land expropriation without compensation,” the manifesto reads.

“Our land was stolen from us by the colonialists.

“We are on a quest to restore our dignity.

“Part of that process is taking ownership of our most precious resource: LAND!

“The land expropriation process must be married with training and skills development, an incubator programme, as well as access to resources and funding.

“Production should be linked with processing and access to markets for emerging farmers to take advantage of the entire value chain.”