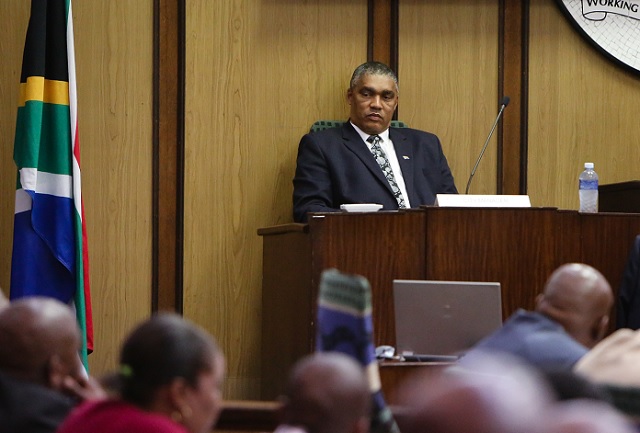 27/09/2018 │City manager Johann Mettler was suspended by the council pending the outcome of a full investigation into allegations of misconduct against him
Image: Werner Hills

Snippets of leaked audio recordings from inside a confidential Nelson Mandela Bay council sitting have offered a glimpse into the hours of debate about the fate of city boss Johann Mettler.

Mettler was suspended on Thursday by the council pending the outcome of a full investigation into allegations of misconduct against him.

The clips reveal how opposition parties the DA, COPE, ACDP and Patriotic Alliance labelled the move a vendetta and witch-hunt.

This, some argued, would bring nothing but instability to the city’s administration.

At the centre of the debate, which dragged on for more than five hours, was whether or not Bay mayor Mongameli Bobani should remain in the chamber during the debate.

[Secret Recording ] ‘It was all about Athol Trollip’

A secret recording made hours before the Patriotic Alliance pulled out of its alliance with the DA in Nelson Mandela Bay for a second time reveals ...
News
2 years ago

The DA and COPE councillors could be heard arguing that Bobani, who brought the allegations against Mettler in May already, had a personal vendetta against him.

In one of the recordings, COPE councillor Siyasanga Sijadu can be heard saying: “I will not be part of using this council to rubber-stamp a personal vendetta. I cannot allow this council to continue in this direction.”

The allegations of misconduct against Mettler include:

● The alleged unlawful extension of the scope of a communications contract with Mohlaleng Media;

● The misappropriation of municipal funds for the implementation of the Municipal Standard Chart of Accounts system;

● The irregular appointment and involvement of Gray Moodliar Attorneys in municipal affairs; and

● Giving incorrect or conflicting advice to the council in the matter involving DA councillor Mbulelo Manyati and whether or not there was a quorum at the August 27 council meeting.

Mettler, in his response, rejected the claims and denied wrongdoing, providing proof he was cleared of wrongdoing in the Mohlaleng saga through a forensic probe.

On Thursday, Mettler confirmed he was aware of the decision to suspend him.

“I have not been formally notified as I have not received a letter and I don’t know the terms of the suspension but I am aware of the decision.”

He said he would report to work on Friday. The DA argued that Mettler had responded substantially to why he should not be suspended, raising pertinent points that it believed would stand up in a court of law.

Leading the charge from the DA were councillors Nqaba Bhanga and Retief Odendaal, who said Bobani was compromised and should not lead the matter involving Mettler as he had been gunning for the city boss since 2016.

They said it could never be that Bobani should be given the executive authority to not only appoint the disciplinary board to oversee his hearing but also to appoint who should act in his position.

They said a number of points raised in Bobani’s allegations against Mettler were council decisions that they were trying to blame him for instead of taking them back to council to rescind.

ACDP councillor Lance Grootboom said councillors should ask themselves if they believed there was reasonable evidence to suggest misconduct had taken place.

He said investigations regarding Mohlaleng Media were complete and that the only thing required from Mettler was to comply with the Section 32 report which stated he should institute disciplinary action against municipal workers implicated. “The investigation does not say he [Mettler] has acted or committed misconduct.

PA councillor Marlon Daniels said at face value the allegations against Mettler seemed like a witch-hunt.

“Never ever must we subject ourselves to be seen by the community out there that we’re busy with witch-hunts.

“I want us to be ethical, credible and ultimately compliant and it’s for that reason I strongly recommend an amendment to what is before us,” Daniels said.

After the lengthy meeting, the political leadership, through municipal spokesperson Mthubanzi Mniki announced it would formally inform the media of the outcome of the meeting at a later stage.

Bobani also recommended that he be given the authority to facilitate the appointment of an independent investigator to probe the allegations.

United Front councillor Mkhuseli Mtsila said the council should allow processes to unfold and should Mettler not be satisfied with the outcome, he could seek legal advice and take the municipality to court.

Recently sworn in DA councillor Lutho Sokudela is no longer a councillor. The Independent Electoral Commission (IEC) on Wednesday confirmed in a ...
News
2 years ago

Why the DA in Nelson Mandela Bay lost

Manyati’s membership was terminated after he told the media, on video, that he planned to resign from the DA.
News
3 years ago