Refuse collection, customer care and other centres hit by action over backpay, wages 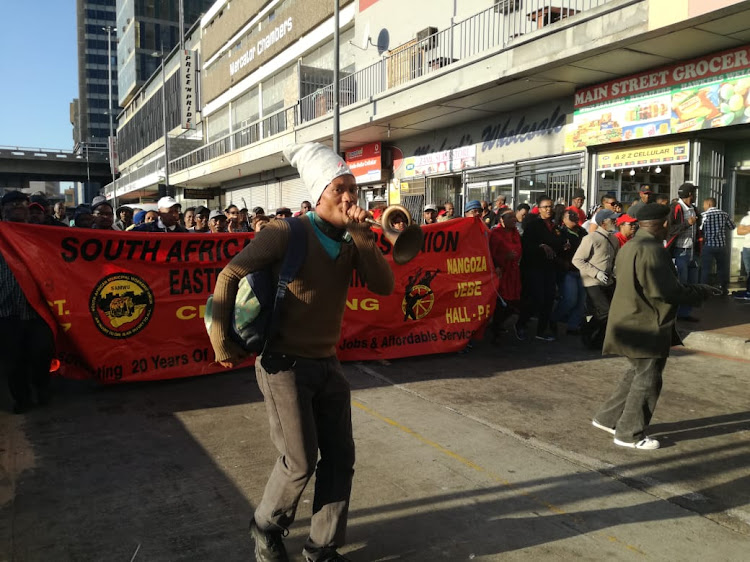 All 38 refuse collection teams did not turn up for duty yesterday while none of the staff at the Uitenhage traffic and licensing centre were at work.

Only the Korsten licensing centre was operational.

Customer care centres – including the main centre at the Mfanasekhaya Gqobose (formerly Eric Tindale) building – and other satellite offices were closed to the public on the first day of the strike.

This meant people trying to pay their accounts or query their bills were turned away.

Staff were barred from leaving the Lillian Diedericks and Mfanasekhaya Gqobose buildings after reporting for duty in the morning.

The workers’ main gripe is that they want 2 689 municipal workers each to be paid a R30 000 settlement.

The demand stems from money owed to these workers after the former Uitenhage, Despatch and Port Elizabeth municipalities merged to form Nelson Mandela Bay in 2000.

“The end of the strike depends on when the employer will resolve the issues,” he said.

They plan to march to City Hall at about 11am today to hand over a memorandum to mayor Athol Trollip.

The workers are also demanding a wage review as well as the reinstatement of suspended workers who have been sitting at home for more than three months without a disciplinary hearing having started.

Another one of their gripes is a life cover that the municipality has taken out on its workers since 1994.

“There is a life cover of some kind unilaterally introduced by the employer.

“We are saying we don’t want to belong to a scheme that we were not involved in when it was contracted with the municipality and we want all our contributions back.”

He said the strikers were aiming for a total shutdown until all their demands were met.

“We won’t relax,” he said. Independent Municipal and Allied Trade Union regional manager Churchill Motapo confirmed his union would be joining the strike on Monday.

City manager Johann Mettler said only the long-service bonus issue had been raised, while the matter of the reinstatement of suspended workers had never been raised with the municipality.

“Steps were taken to try to reach an amicable resolution in this matter but due to the current nature of demands, the mayoral committee and the municipal council will have to reconsider this matter as it has major fiscal implications for the municipality,” Mettler said.

He said only the Korsten [traffic and licensing centre] was operational yesterday.

“Since traffic services is an essential service, we will instruct staff to return to work.

“If this call is not heeded, they will be interdicted.”

Asked if management had met union representatives over the workers’ demands, Mettler said officials had spoken to them about picketing rules.

“The municipality would like to resolve this industrial action as soon as possible to limit the impact on service delivery.

“A joint operations centre has been established to monitor the strike impact and to deal with eventualities.”

The strike, which the municipality confirmed is a legal strike, began on Thursday morning.
News
4 years ago