'Unfair' to suggest quality of reports declined under Mkhwebane based on those set aside: senior manager 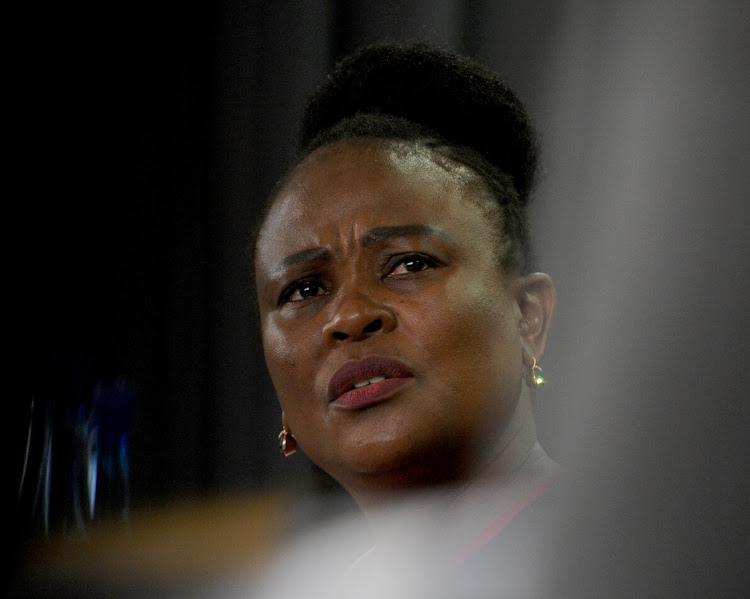 A senior manager in the office of the public protector says it would be unfair to say the quality of reports was compromised under Busisiwe Mkhwebane despite several being set aside by the courts.

Futana Tebele, a senior manager for executive support in the office of the public protector, came to Mkhwebane’s defence at the parliamentary hearings into her fitness to hold office.

Several of Mkhwebane’s reports were challenged and successfully set aside by the courts. These include the Bankorp-CIEX report into apartheid bailout money; report into whether Pravin Gordhan had acted unlawfully and irregularly in approving early retirement for then Sars deputy commissioner Ivan Pillay; the Sars rogue unit as well as the Estina Vrede farm report.

These, Tebele told the inquiry, were not enough to warrant a view that the quality of reports produced by the office of the public protector under Mkhwebane had been poor.

One would first have to juxtapose the number of reports that have been set aside against those that have not to come to such a conclusion.

“That is a subject of statistics. If the honourable member can say there are 100 reports that were issued by the current public protector and 70% of those reports the courts found them wanting, because I don’t have the statistics I’m unable to make to what you’re saying,” Tebele said.

DA MP Kevin Mileham pressed Tebele on whether, given the facts, he stands by his statement that the quality of the reports did not decline.

As an example, Mileham referred to the Gordhan report where he said the court found Mkhwebane had inserted her own words in defining the executive ethics code that were not accurate.

“Honourable member in a way you’re trying to put me in a corner but I’m going to respond. You can’t talk about one report and you would want me to make a statement that the quality of reports declined. How many reports did the courts talk about and then how many reports are still in good standing? That is all what I’m asking,” Tebele said.

“For me to give an accurate answer without looking at one report I would need to check how many reports are still in good standing and how many reports have been set aside by the courts. Then I’ll be able to say the standard has declined but currently, I am unable based on one report or two reports or three reports. It needs to be done on a population of the reports for me to say that I agree with the courts but I’m unable to say to you that there is a decline in the number of reports. What about those that are still in good standing? What do we say about them?”

Tebele, who said he has about 20 years' experience in the field, said he believed Mkhwebane was a team player but that people may have had a problem with her because of her stance on certain matters including deadlines.

[Mkhwebane] is a team player, she does guide her team in terms of the investigation.Yes, she is strict in terms of what needs to be done and that one I won’t take away from her. She is very strict and timebound

During the proceedings however, he was presented with an SMS which was believed to have been from Mkhwebane and addressed to former COO Basani Baloyi in February 2019.

The SMS reportedly read: “COO be careful of what you hear from Pona and Tebele. But you are an adult, be wise.”

In response to this, Tebele said: “The SMS is noted from my side but there is nothing I can do on the SMS and I cannot change because of the SMS because I don’t know under what context and why was it done. So I’m not going to label the author of the SMS in terms of how the author saw me when the SMS was sent.

“I’m indifferent and I remain who I am and loyal to this institution even after that SMS ... I had no confrontation from the public protector if she is the author of that SMS relating to the SMS. So I’m indifferent and how I see the institution remains the same. I could be disappointed and trying to understand what the SMS meant but for now I don’t think that it will help me because it’s almost three years ago or two years ago. So if I go to the past then I won’t go forward.”

He continued to sing Mkhwebane's praises.

“Yes, public protector is a team player. I don’t think that there is anyone in this office who doesn’t know the public protector and she has been participating in most of these meetings, mostly relating to work. I think that is where maybe many people don’t like seeing her many times,” he said.

“But she is a team player, she does guide her team in terms of the investigation. Yes, she is strict in terms of what needs to be done and that one I won’t take away from her. She is very strict and timebound.”