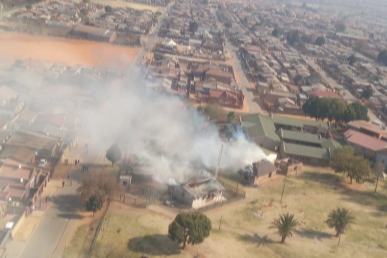 Residents took to the streets this week to protest against electricity cuts for defaulting customers and “high municipal rates”. Roads were barricaded with rocks and burning tyres and several buildings and cars were set alight. Four people died in the violence.

Speaking on 702, Campbell said genuine service delivery protests had been taken over by external forces pushing an orchestrated plan of criminality.

“There are external forces taking advantage of the situation. The same situation we saw in July last year when criminality took over real issues communities wanted to address. I will be in conversation with the provincial police commissioner and the premier on a resolution going forward”.

KwaZulu-Natal was plunged into chaos in July last year by riots and looting that spread to Gauteng, leaving about 354 people dead, communities in ruins and billions of rand in damage.

Burial services were cancelled and Eskom withdrew services in Thembisa this week amid the unrest.

“Services will resume only when it is safe for our employees to work in the area,” Eskom said.