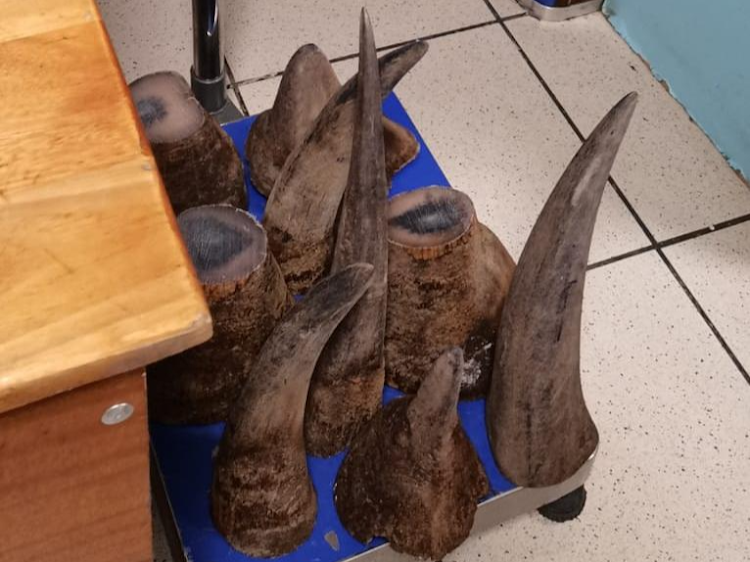 Recent trends in rhino poaching show a move away from the Kruger National Park to private reserves and KwaZulu-Natal, where most rhinos have been killed this year.
Image: Sars

In the first six months of this year, 259 rhino have been poached for their horn in SA.

Recent trends in rhino poaching show a move away from the Kruger National Park to private reserves and KwaZulu-Natal, where most rhinos have been killed this year.

“This makes it all the more important for government to shift its focus to supporting provincial authorities and private reserves in the war on rhino poaching,” said environment minister Barbara Creecy.

The number of rhinos poached between January and June this year is 10 more than the 249 poached countrywide in the first six months of 2021.

Poaching statistics show a loss of 210 rhinos on state properties and 49 in privately-owned parks from January to end-June 2022, with 82 rhinos poached in the Kruger National Park. Hardest hit during this period is KwaZulu-Natal, which recorded a loss of 133 animals.

“The demand for rhino horn remains a constant threat to our rhino populations as crime syndicates continue to operate within our borders,” said the ministry.

“This arrest demonstrates the success of country-to-country co-operation to combat wildlife trafficking at an international level,” she said, adding partnerships have been struck with countries in Southeast Asia, especially China, Malaysia and Vietnam.

The Hawks are also working with the US Fish and Wildlife service in an investigation arising from the discovery in June of a suspect parcel at FedEx that was destined for the US. The parcel contained 8kg of rhino horns pieces concealed as wooden art pieces.

Search and seizure operations took place countrywide, with the Hawks arresting one suspect and confiscating 29 rhino horns during an operation at storage and packing facilities in Bedfordview, Gauteng, where rhino horns are prepared and packed for the illegal markets in Southeast Asia.

In combined law enforcement operations, two suspects were arrested in June when they were stopped by the highway patrol in Bedfordview and found to be in possession of two fresh rhino horns. Two suspects, one an ex Ezemvelo-KZN Parks ranger, were arrested earlier this month after their vehicle was searched and two fresh rhino horns were seized. One of the accused had previously been arrested for possession of rhino horn in the Kruger National Park.

In April, an integrated operation was conducted to address money laundering and corruption linked to rhino horn trafficking activities within the Kruger National Park. Premises in Limpopo and Mpumalanga were searched. Three suspects were arrested during the operation, including two Kruger National Park field rangers. One of the rangers was dismissed during a departmental hearing on July 21. The other ranger’s departmental hearing is ongoing, pending the outcome of the court process.

In total, 51 cases in which 51 people were convicted have been finalised. The heaviest sentence handed down was 34 years' imprisonment, while two Mpumalanga men were sentenced to 28 years behind bars for killing rhino and being in possession of illegal firearms and ammunition.

In the Skukuza court, two Mozambican nationals were convicted for poaching a rhino in the Kruger Park, possession of unlawful firearms and ammunition and being in the country illegally. They were sentenced to 18 years' imprisonment.

In another matter, two Mozambican citizens were convicted of poaching two rhinos in Kruger National Park, possession of unlawful firearms and ammunition and sentenced to 19 years' imprisonment. In addition, three South Africans were sentenced on charges of rhino poaching in the Kruger Park and firearm-related charges, and sentenced to an effective 24 years in jail.

From park to casino

The global money laundering and terrorist financing watchdog, the Financial Action Task Force (FATF), had completed an assessment in 2019 of the threats posed to SA and the effort being made to fight these crimes.

“During this process the contribution of wildlife trafficking to the generation of proceeds of crime was found to pose a medium to high risk to the country,” said the ministry.

Responding to the recommendations of FATF, earlier this year the National Prosecuting Authority obtained its first conviction on stand-alone charges in terms of the Prevention of Organised Crime Act (money laundering). The suspect was accused of laundering the money earned from, among others, the buying of rhino horn, through a casino. Ping Wu was sentenced to five years imprisonment.

“The success of this prosecution demonstrates the importance of the government’s integrated approach to combat rhino horn trafficking, with increased focus on targeting the financial crimes involved. We are expecting numerous similar successes in the near future,” said Creecy.

She said members of the public can report any suspicious activities concerning wildlife to its environmental crime hotline 0800 205 005, or the police number 10111.