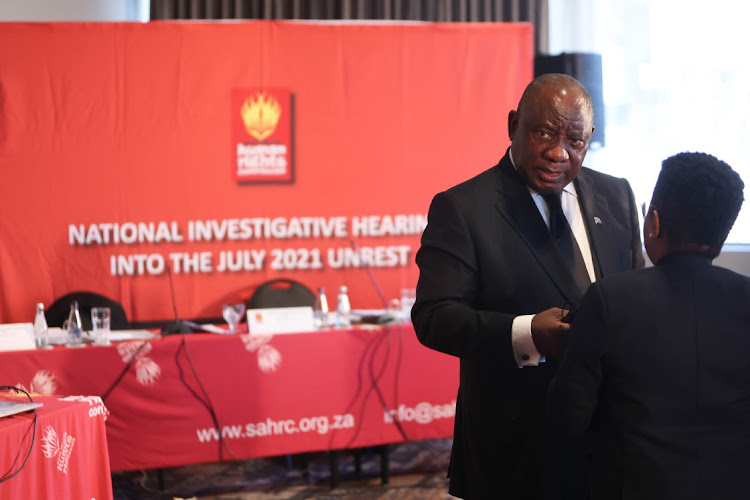 President Cyril Ramaphosa talks to members of his legal team after giving testimony at the SAHRC hearing on the July 2021 unrest. He said SA needed to go through a healing process after the deadly unrest that rocked the nation.
Image: Alaister Russell/Sunday Times

The SA Human Rights Commission (SAHRC) had not yet set a date for the release of its report on the July 2021 unrest.

The commission's acting CEO Chantal Kisoon told TimesLIVE on Wednesday it would be released once the commission was satisfied it was ready to do so.

“We understand that the country is expecting the report to get answers on the causes, outcomes and responses with regards to the July [2021] unrest. The commission must balance this need with its responsibility to provide a report that satisfies its need for objectivity, quality and veracity of information it has received, given the significance of the issues traversed.”

The commission was analysing evidence received — oral and written submissions — and engaging with witnesses for additional information where required.

“We are awaiting a few written responses to queries as we deliberate on the evidence and begin developing our report,” she said.

The commission was satisfied it was able to gather a wide range of evidence from ordinary South Africans — victims, witnesses, experts, government officials, ministers and the president — who came to testify about their experiences, pain and suffering stemming from the unrest.

“A large number of people availed themselves to support the hearings. This support and the information we received provided rich insights to inform our deliberations. It has also provided benefits to the public who were able to see and hear what was being shared with the SAHRC.

“In this way, the hearings themselves provided a measure for healing and hope. The hearings have largely proceeded without many challenges. While unprecedented, the commission has had the benefit of experience in convening investigative probes in the past and this has assisted in the successful convening of this hearing.

“The commission has, however, been mindful about the use of limited resources and to be aware of the need to respond with its findings without undue delay. The hearings have also provided opportunities for other stakeholders to form and implement responses, whether at the level of actions taken in respect of the SAPS, or in the context of rebuilding and supporting efforts by human rights defenders.”