‘We do not expect any drama,’ says AmaFaku royal family as AmaMpondo King Zanozuko is laid to rest 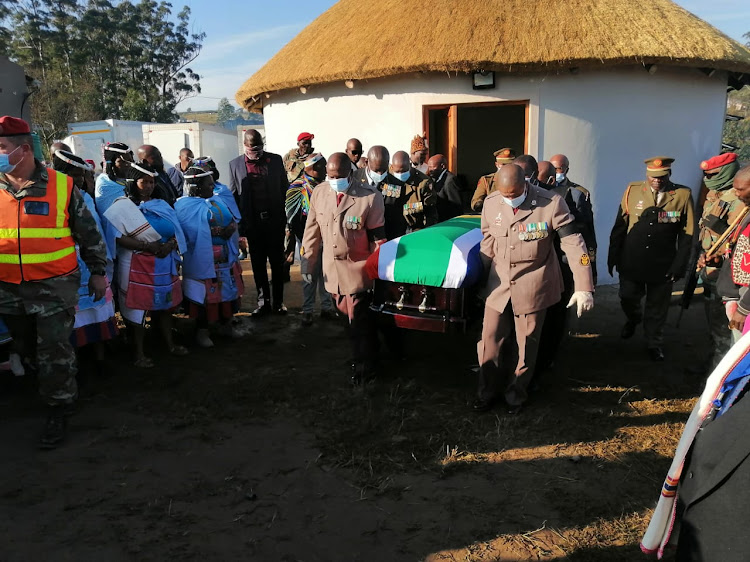 The special category 1 funeral service for the late AmaMpondo King Zanozuko Tyelovuyo Sigcau on Tuesday is expected to take place amid tensions in the royal family over who is the legitimate heir to handle the burial rituals.

In the early hours of Tuesday the family was locked in a bitter court dispute after the AmaFaku royal family and acting king of the AmaMpondo, Prince Dumelani Sigcau, filed an urgent application before the high court in Mthatha on Monday evening, seeking to prevent the funeral of the late king from taking place without their involvement.

Recognised as the legitimate acting king and body, they were granted an order which allows them to lead the funeral proceedings, which took place during the early hours on Tuesday.

They wanted an order declaring them as the correct people and structure to oversee and perform all customary rituals during the burial or funeral service for the late king.

President Cyril Ramaphosa is expected to deliver the eulogy during the service, which was meant to begin at 9am at the Ndimakude Great Place in Flagstaff in the Eastern Cape.

TimesLIVE understands the acting king was allowed to view the late king’s body and performed the necessary rituals on Tuesday morning despite several challenges around releasing the late king’s remains.

Spokesperson for the AmaFaku royal family Prince Mzwandile Marhaqana said: “So far, so good. Everything is going according to plan. We do not expect any drama. It is unfortunate we had to resort to a court to resolve the matter when we should have sorted it out internally as a family. We had no choice but to go to court.”

In an interview with TimesLIVE early on Tuesday, the late king's brother, Prince Chulumancu Sigcau, said the family was forced to go to court to remind the government that Prince Dumelani was the legitimate acting king.

“After the order was granted, we met with the family and communicated the order. We are still experiencing some defiance. They are trying to defy the court order and this defiance started when it was time for the morgue to release the body so the rituals could be performed,” he said.

“Even though it’s traumatising, we will rectify it. The funeral will happen. The acting king was able to identify the body of the late king and the rituals were performed in the early hours of the morning.”

Sigcau said after Ramaphosa declared a special official category 1 funeral for the late king, the royal family appointed Prince Dumelani on June 2 to be the acting king as there were certain rituals that needed to be performed by a king on the day of the burial of a sitting king.

“When it was time to put the king to rest, the government did not recognise the AmaFaku as a royal family. There are rituals that need to be performed specifically by the king, like the placing of the hide on the casket for the last time.

“After we appointed our acting king, we sent the particulars of the acting king to the office of premier Oscar Mabuyane. Then a distant relative named Stella, who has been at loggerheads with the king, sent a letter to the premier saying her brother is the rightful heir.”

Sigcau said Mabuyane wrote back, saying “he is conflicted and confused” by the submission of the two names.

“We told the government they should not be confused. We, as the royal family, have appointed an acting king from where the late king comes from. We told the premier to rectify this or we are going to court and they ignored this.”

Sigcau said it was only the presidency that acknowledged receipt of the letter.

“That is why we filed an urgent court application, to remind the government and all parties involved that there is a certain responsibly a king needs to do at the funeral. The government wanted to deal with the matter after the funeral and we felt the funeral could not continue because we will not allow the government to dictate to us our customs and traditions as AmaMpondo.

“The funeral will continue and will be led by acting king Dumelani Sigcau.”