'I would have said to him, happy birthday': Dad of boy who fell into manhole opens up about his pain 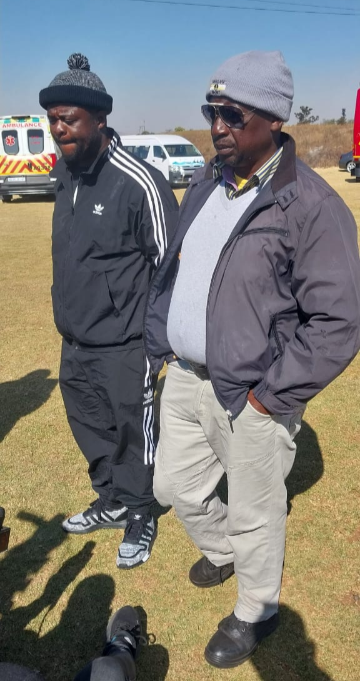 The heartbroken father of five-year-old Khayalethu Magadla, who fell into a sewer manhole in Soweto on June 12, has opened up about the pain he is feeling for his missing son, who would have turned six on Monday.

Khayalethu fell into an open manhole while playing with friends at Eco Park in Dlamini.

Speaking to the media for the first time at the operation centre set up by Johannesburg emergency medical services last Monday, Kholekile Magadla revealed his anguish.

Magadla, who appeared emotionally drained, said when Johannesburg mayor Mpho Phalatse visited his family last week he asked that the search team continue the search until the boy is found.

“I am getting there. I am hoping they will find the boy, because when I look, it's very hard. But with God's [help] we will find him,” he said.

He has been monitoring the search operation since it started last Monday.

The problem seemed to be that the authorities did not know the exact layout of the sewer system pipes — where they led to and intersected — and were discovering it as they moved along the line, which made the search difficult.

“They discover during the search. That will be difficult because of the plan on plumbing, I don't think they have it. I am not sure about that, but the way it is happening I can see some of the holes they discover along the search.

“I feel like it's going to be a long procedure for them to find him, but they will find him. I believe he is here, that's the thing I am feeling at the moment,” he said.

On Monday, Khayalethu would have been celebrating. Magadla said it was painful and they would have bought him a cake.

“I would have said to him, 'Happy birthday, boy,' and bought him a cake and told him I love him so much, as always.”

Johannesburg EMS spokesperson Robert Mulaudzi said he was aware the search was taking long. “Yes, we still have hopes of finding him, hence we are here. We will continue the search until we get to the split chamber and search that area,” he said.

The search started where the child fell into the manhole and was continuing along the pipeline.

“We are trying to remove any uncertainty along the pipeline,” said Mulaudzi

“Yesterday [Sunday], when we got to the fourth manhole we discovered four other manholes which we explored. We managed to deploy our technology along those four manholes and we tried to locate blockages along those pipelines, but unfortunately it was not positive.

“If in all those areas we don't manage to locate the boy, we will continue from that side going up towards the split chamber, from the ventilation shaft to the split chamber. We still have about two manholes which we have to explore.

“The main objective now is to remove any uncertainty, so that the line is flowing. If there is any obstruction, we remove it. If we manage to locate the boy, then we do so.”