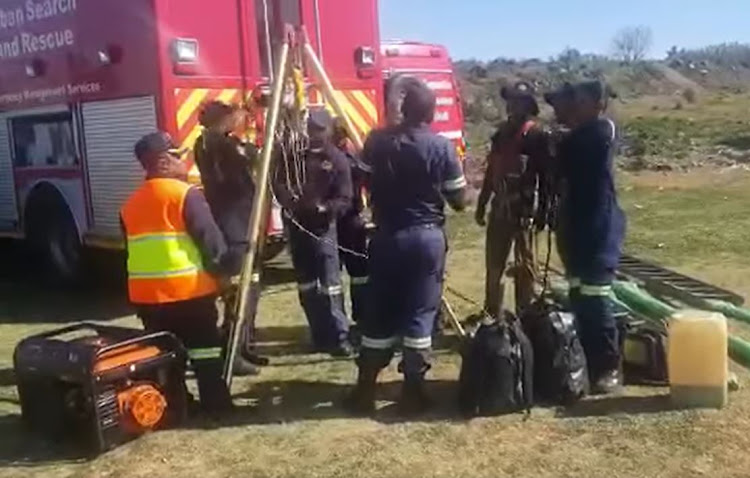 Police and others continued the search for Khayalethu Magadla, 6, who fell down a manhole in Soweto last Sunday.
Image: Screengrab via Twitter/RobertMulaudzi

After seven days,  there still has been no sight of the six-year-old boy who fell down a manhole while playing with friends in Soweto last Sunday.

Khayalethu Magadla plunged into an uncovered manhole at a popular park on Mtambo Street in Dlamini, Soweto, and has been missing since.

From Monday police divers, rescuers, paramedics and municipal workers have been hard at work trying to find him, but rescue workers believe after so much time, the chances of finding him alive are slim.

@CityofJoburgEMS Its #Day7 today we continue to search for young Khayalethu who slipped and fell into a manhole last Sunday,we have discovered other 4 manholes along the pipeline which were covered we will be exploring with the hope of locating the young boy.@CityofJoburgZA pic.twitter.com/H3q8sKYern

According to officials the last hope of finding him is at a sewer split chamber in Klipspruit.

The chamber situated near the Avalon Cemetery is the central point where all sewage and debris flows to. There, officials were hopeful they will make progress.

On Sunday at 18:00, spokesperson for the City of Johannesburg Emergency Management Services, Robert Mulaudzi said the team was wrapping up operations after another unsuccessful search.

He said for the next hour or so the team would brief Magadla's parents on the day's events.

"[We] also show them the footage taken in the sewer...because we made a commitment...to update them on a day-to-day basis...which really becomes emotional. Half an hour to an hour of us briefing them and them also asking us some questions," Mulaudzi said.

Footage from inside the sewage system where Khayalethu Magadla is believed to be.
The little boy was playing with friends when he fell into an uncovered manhole at a park in Soweto.
Authorities have worked at the site since Monday.
Video: @RobertMulaudzi pic.twitter.com/qIcBnJ9UdZ

He said the team managed to cover eight kilometres of the pipeline and had six more kilometres to go before they hit the split chamber.

The team managed to cover a section where they discovered four other manholes which had been covered.

They used a floating boat fitted with an underwater camera and a camera on the surface which gave them a 360° view of the pipeline. Technicians were also deployed along the pipeline using an external air supply system.

"Unfortunately, we couldn't locate anything along that line. So, we will be dispatching our technology [on Monday] from the last main hole which was discovered today, towards the ventilation shafts, which fall [under] what is the corners of Main Rd and Fuschia Rd.

"We'll have to reconvene again [on Monday] to continue with the pipeline because we still have about another two man holes still to cover [along] Main Rd, just before we get to this big chamber.

"Right now from where we are... the split chamber is about 13 km away.

"So for now, I'll say we've covered about eight kilometers of the pipeline, so we're calling our search off for today."

Mulaudzi said if nothing was found along the remaining pipeline or the split chamber, they would have to call the operation off.