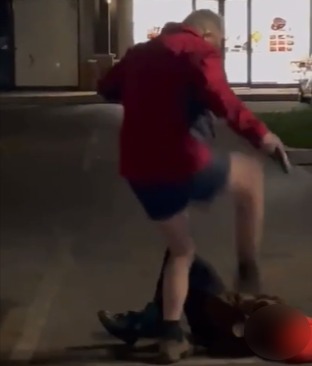 The man allegedly kicked and stomped on the teenager while holding a firearm.
Image: Screenshot via Twitter

A man arrested for allegedly assaulting a 16-year-old boy during an argument over salt seasoning in Groblersdal in Limpopo will remain in custody after the town's magistrate’s court postponed his bail application on Friday.

The bail application of the gun-wielding man, Corrie Pretorius, 50, was postponed to June 24.

He appeared briefly in the magistrate’s court on charges of assault with intent to do grievous bodily harm and pointing a firearm.

ANC and EFF supporters protested outside the court to demand that the suspect not be given bail.

EFF Sekhukhune convener Mgcini Tshwaku said they would return to court when the man appeared again. “We will be there in full force to put pressure on the court not to give the guy bail,” he said.

Limpopo police spokesperson Brig Motlafela Mojapelo said an argument broke out after the victim and his cousin allegedly wanted to use the same seasoning [container] as the suspect.

“The suspect then became furious and started assaulting the teenager while pointing a firearm at him. The other shoppers watched helplessly as the suspect assaulted the boy until he eventually left him lying on the ground.”

He said the victim was taken to hospital and was later discharged.

“We will not tolerate incidents of gender-based violence and attacks on our children and we will ensure that justice prevails for the victim. In the meantime, we urge community members to remain calm and allow us space to deal with the matter,” said Limpopo police commissioner Lt-Gen Thembi Hadebe.

TimesLIVE reported previously that the incident, outside a shop that sells hot food, allegedly happened on Wednesday evening.