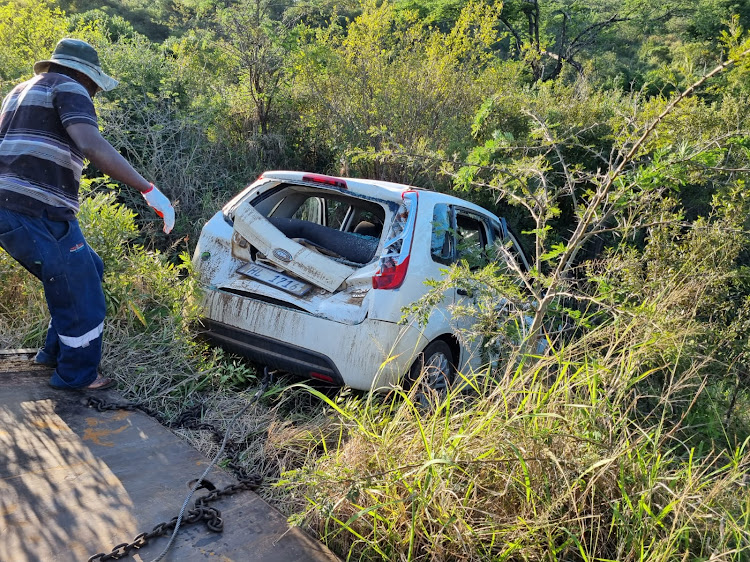 It was just after midday on Wednesday when the occupants of a white Ford Figo had a close encounter with the elephant on the road from Memorial Gate to Hilltop Resort. When the driver of the car noticed the seemingly relaxed elephant approach, he moved to the side of the road to let it pass, as per the park rule to give animals the right of way.

Instead of going past, the elephant lay its trunk on the bonnet. When the driver tried to extricate the vehicle the elephant put its tusk through the passenger window, smashing the glass.

“It lifted the car like rugby players performing a lifting in a line-out. It, unfortunately, decided not to complete this common rugby action, choosing instead to throw the car into a ditch on the side of the road,” said Ezemvelo field ranger Velenkosini Ntombela, who witnessed the incident.

“As if that was not scary enough, the elephant continued to push and attack the car’s rear before deciding it was not worth it to waste its energy on an object that did not retaliate, so it backed off.”

According to Ntombela, within a twinkle of an eye the demolition was complete and the elephant backed off “as if it was standing in it's corner to let the boxing match referee count up to 10 before declaring the fight over”.

It only moved from the car when Ntombela safely discharged a warning shot as it again approached the car with its shaken occupants inside.

The sound of the discharged firearm stopped the elephant's approach and it disappeared into the bush. The occupants of the battered car were transferred to the ranger’s car and moved to safety. No visible physical injuries were observed on both occupants. The damaged car was towed away.

Ezemvelo acting CEO Ntsikelelo Dlulane expressed his relief that no lives were lost, adding that things could have turned ugly.

“I am thankful that there was no loss of human life and both occupants survived the ordeal without any visible injuries. My appreciation also goes to Mr Ntombela who remained calm under trying circumstances. We will never know what would have happened had he panicked and decided to shoot the elephant,” he said.