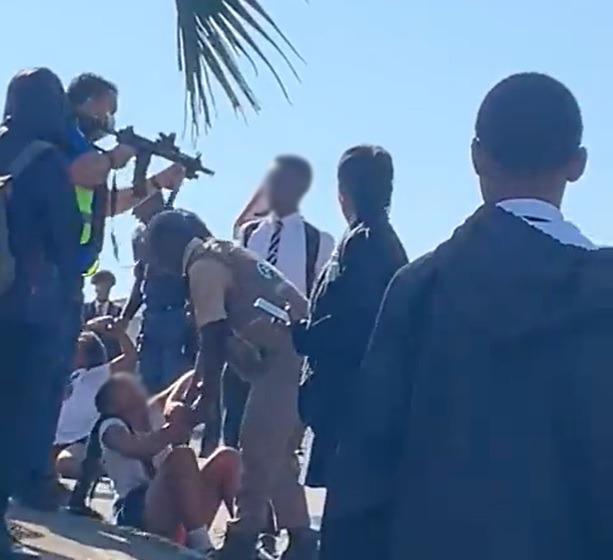 A screenshot from a video clip online shows an alleged security officer pointing a firearm in the face of a school pupil outside Effingham Secondary School in Durban.
Image: Screenshot

Durban metro police have denied allegations of brutality after an incident at a city school  on Thursday.

This follows the videos that have been shared widely on social media showing a pupil at  Effingham Secondary School being dragged and manhandled by security personnel. The videos also show a guard pointing a rifle at a pupil in school uniform.

“One security member tried to forcibly arrest one of the learners and one of the metro police members intervened to separate the two,” said Sewpersad.

He confirmed that the man seen in the video pointing a rifle at a girl in a school uniform was not from the metro police.

“The rifle in the video is an AR with a red sight. Metro police do not issue such rifles. The reflective jacket worn by the person is also not that of metro police.”

Chairperson Sfiso Sonjica said they were “shocked and disgusted” by allegations of racism and manhandling of pupils “who were on a peaceful strike”.

He added: “We are disturbed very much by the video that has gone viral showing confrontation between the learners and the security personnel.

“We are more than disturbed by alleged racism in the school, and it is our view that the department must immediately investigate these allegations and act in accordance with the law.

“We have a great interest in seeing that racism in any form in our schools and society in general must be eliminated in all its forms.”

KwaZulu-Natal education MEC Kwazi Mshengu said he had assembled a team to look into “police brutality against learners of Effingham Secondary”.

On Twitter, Mshengu said: “Legal services have been directed to assist in opening criminal cases against the person who pointed a rifle at learners.”

Effingham Secondary has written to parents informing them that teaching and learning will resume on Monday for grades 8,9 and 12. Grades 10 and 11 will return on Tuesday.