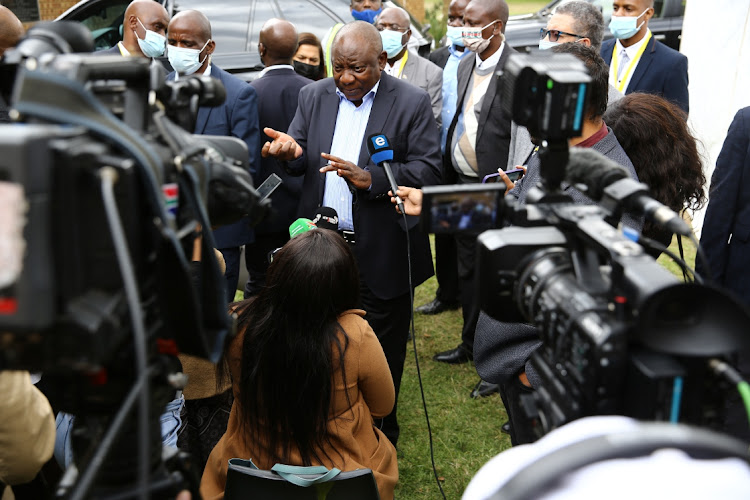 President Cyril Ramaphosa addressing that media in Carolina, Mpumalanga at Dutch Reformed Church where he engaged with the local business fraternity ahead of the imbizo.
Image: Thapelo Morebudi/The Sunday Times.

President Cyril Ramaphosa on Friday said he remained hopeful power utility Eskom would do everything it could to avoid stage 8 load-shedding.

“I don’t really believe that we will go up to stage eight. I think the management is doing everything that they can to ensure that they keep up with maintenance and if there are breakdowns, they repair very quickly. So we are still very hopeful that we have a management under control,” said Ramaphosa.

The president was speaking on the sidelines of the third instalment of the presidential imbizo in Carolina, Mpumalanga.

Journalists quizzed Ramaphosa about energy experts warning that consumers should brace themselves for stage 8 blackouts that would continue for 48 hours over four days.

Energy expert Mike Rossouw told eNCA that the ongoing load-shedding between 5pm and 10pm was having a negative impact on businesses and the economy was taking a knock.

Ramaphosa said: “Obviously it’s a recurring problem with Eskom and as we get to hear that more and more sabotage is part of the challenges we are having to deal with, including the difficulties that they are having in dealing with maintenance and breakages.

“I think we will continue having load-shedding but it is going to be the type that they will warn everybody about in advance as they try everything they can to keep the lights on and the generations going on.”

TimesLIVE reported Eskom confirmed that sabotage, most likely by its own employees, was behind the breakdowns at the Tutuka and Hendrina power stations this week.

Ramaphosa also weighed in on the predicted petrol price hike saying: “The petrol increase is as a result of petrol rises globally. Many countries are suffering the same effect. In our case we took an initiative, which is going to come to an end at the end of this month, and unfortunately it is going to hit drivers and car owners quiet hard.