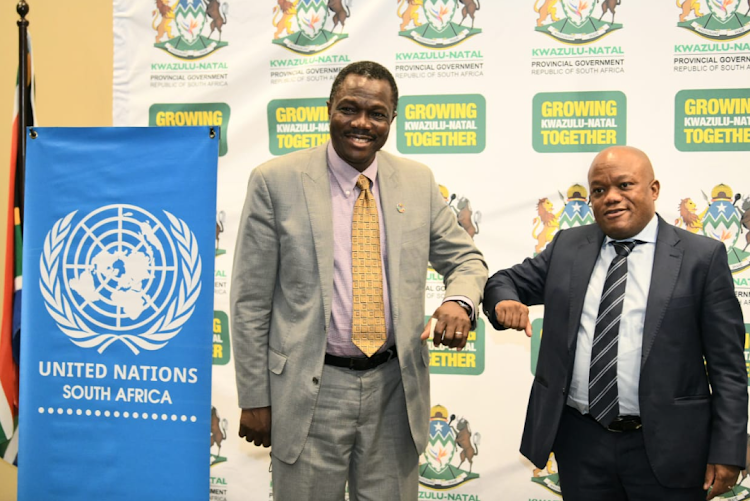 The UN SA has reallocated R21m of its programming budget to support government’s response to flood-damaged KwaZulu-Natal.

This was an undertaking made by the UN’s acting resident coordinator  Ayodele Odusola, at press briefing with KwaZulu-Natal premier Sihle Zikalala in Mayville, Durban on Thursday afternoon.

He said the floods, coupled with ongoing socio-economic challenges, presented an opportunity and an ultimatum for everyone.

“It’s a clear sign the impact of climate change is one of the pressing issues of our time,” said Odusola.

He said in the aftermath of the disaster, UN agencies had been working closely with government to provide support to the affected communities.

The UN would also work with eThekwini municipality to build on existing work with the co-operative governance department through the district development mode and provincial government’s Operation Sukuma Sakhe (Stand Up and Build),  geared towards accelerating service delivery, to assess progress on repairs to infrastructure damaged during the storms last month.

“We are focusing our attention on immediate humanitarian needs in those communities that are extremely vulnerable and marginalised so we can make an impact on the ground,” said Odusola.

Zikalala said provincial government was moving with speed to ensure things return to normal in the province following the floods that left trails of destruction.

“Eventually we would have to build houses so people go back to reside in their respective areas in proper houses,” said Zikalala.

He said they are working hard to ensure all destroyed infrastructure, especially that which responds to services, is restored. He said the co-operative governance department is working on this restoration.

The premiser said although districts such as Ilembe, uMgungundlovu and Ugu had borne the brunt of flooding, eThekwini metro had been hardest hit.

“The system of water supply was severely affected, with some areas with some areas not having potable drinking water. This is more prevalent in the northern part of eThekwini,” said Zikalala.

He said the electricity, waste and sewer systems were destroyed.

“We are in quite a challenging environment which could lead to other disasters due to diseases which are prone when people are living together in such conditions,. We are doing all we can to avert such a situation,” said Zikalala.

He said the province had suffered a serious blow in terms of regression of developmen.

Major road networks and bridges had been destroyed, including the N2 in the south and north.

“That on its own creates serious challenges in terms of traffic and also economic opportunities and activitie. We are working to construct by passes in those areas,” said Zikalala.

He said plans are afoot to build at least 48 bridges. The department of public works has approved the construction of 18 bridges.

This project would be undertaken through a programme which also involves the defence force .

“The magnitude of the damage caused by floods is serious and severe. We hope with time we are able to restore hope and rebuild damaged infrastructure left damaged,”