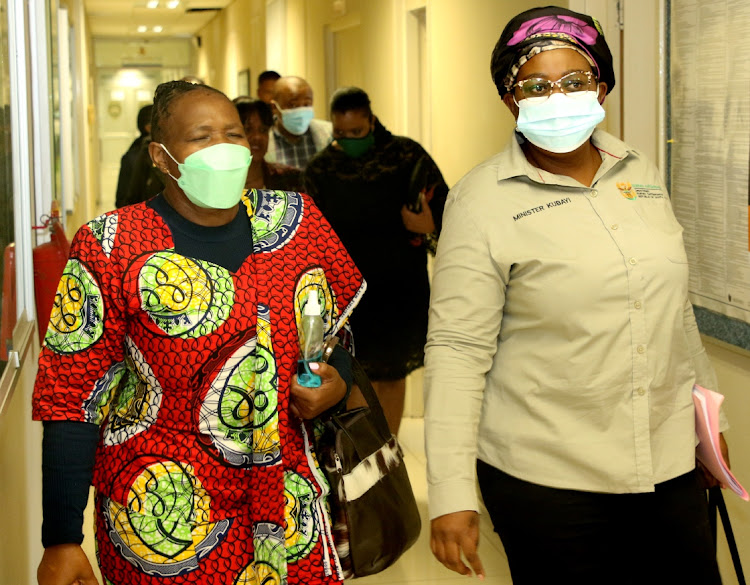 Delays in title deed and shoddy workmanship were some of the complaints listed by military veterans to human settlements minister Mmamoloko Kubayi when she visited the Chatty housing development project in Nelson Mandela Bay on Thursday?.

Tarring of roads and general beatification were also pleas made to Kubayi by residents who said that while they were happy about the project, there was still much to be done.

Kubayi stopped by the Chatty and KwaDwesi extension as part of her oversight visit to the metro to ensure a ramp up in the provision of housing.

Speaking on behalf of the veterans, Zolani Mabusela said it was sad that erstwhile Bantustan leaders had managed to deliver better housing.

“We are disappointed with the matchbox houses,” Mabusela said.

“The square metre allocation needs to be something that will be reconsidered because the site of land cannot support any development for us who live here.

“The plumbing is in tatters. We have cracks on the walls that will only widen because they are not being attended to.

“I cannot even use my geyser because the connection is so poorly done it keeps disconnecting,” he said.

Kubayi took a tour of the settlement to see the condition of the houses.

She was accompanied by mayor Eugene Johnson.

One of the houses visited belonged to Mazwenene Smith.

At the house, Mazwenene showed how poor plumbing had led to his kitchen tap running 24 hours a day and his bathroom flooding because of pipe connections.

According to Kubayi, part of the visit was to oversee the work of a war room and the implementation of a turnaround strategy.

“You will remember last year during the mid-term adjustment budget the municipality lost some money.

“We have been asking the technical teams to work towards an implementation of a turnaround strategy,” Kubayi said.

In 2021, R150m allocated to the human settlements department had to be returned to the National Treasury after the metro could not spend the money.

Earlier in the day, Kubayi was locked in a technical briefing where the metro presented its turnaround strategy.

The minister, however, said she was unimpressed and that more work needed to be done.

“We have agreed the technical teams must go back to work.

“We have given them seven days to give us a tangible plan,” she said.

Some of the issues pointed out by Kubayi included a decline in contractor performance and shoddy workmanship.

She also cited political instability in the council as a cause for the failure in service delivery.

“I must say I am unhappy that we are not building more houses and it seems we will have to work together and the three spheres of government,”  Kubayi said.