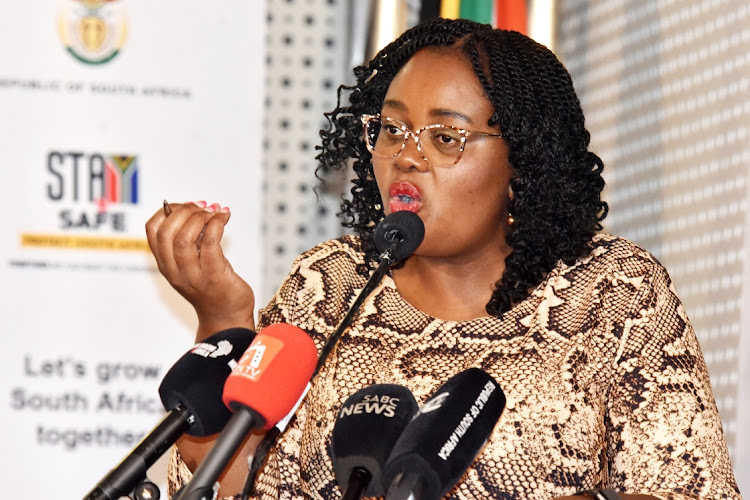 Human settlements minister Mamoloko Kubayi on Tuesday announced that the department had established a 'war room' to speed up its service delivery objectives.

Kubayi was tabling the human settlements budget in a hybrid sitting of parliament.

With the establishment of the war room, promised Kubayi, bottlenecks and slow service delivery would be a thing of the past.

Dan Gorbachev Mashitisho, who was previously the administration boss of the department of co-operative governance and traditional affairs, would head the war room, she said.

Mashitisho would work with a team of “highly specialised individuals” including Abongile Dyarhiwe who brings expertise in construction, Patience Ndlovu, a specialist in urban planning, and Dr Ephraim Tau who is a governance guru.

Kwena Maphoto, an infrastructure development specialist who is a professional technologist in civil engineering, will complete the war room team.

“For the financial year 2022/23, the department’s budget allocation amounts to R33bn, of which R 18.7bn is allocated to provincial grants, R 11.7bn for municipal grants and R 1.6bn to be transferred to human settlements entities,” said Kubayi. “We will make every effort to ensure that we deploy these resources as efficiently as we can so that we can get more for less.”

The budget speech was widely welcomed by opposition parties, albeit some with strong reservations such as DA MP  Louise Powell who said much has been promised before and very little came to fruition.

She expressed hope in Kubayi’s leadership but warned her that knives were out for her if she thought rooting out endemic corruption in the department would be smooth sailing.

“Every year at this time members of this house are subjected to long lists of promises from incompetent and compromised ministers on what they intend to do, yet so little action is [seen] because in reality the ANC’s achievements in government amount to so very little,” said Powell. “Thankfully, a silver lining has appeared in the form of a new minister (Kubayi) who so far has been true to her word in her genuine attempts to rid the department her predecessor’s (Lindiwe Sisulu's) corrupt patronage network,” Powell added.

“Time will tell if her fist is firm enough to stand up to the nefarious and dangerous characters that sit behind, not opposite, her on the parliamentary benches. She confronts a lion’s den of greed-obsessed cronies on the inside and empty stomachs on the outside. The knives will soon be out for her.”