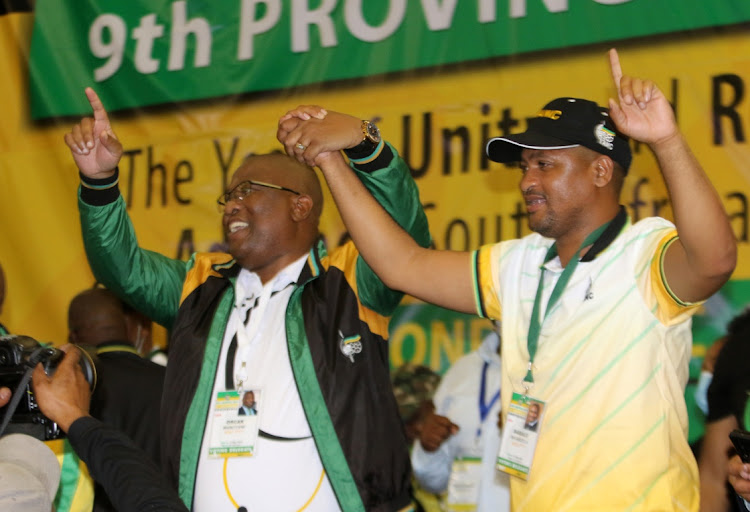 Two candidates who are up against each other for the top ANC seat in the Eastern Cape, Oscar Mabuyane and Babalo Madikizela seen dancing together and holding hands during the Conference held in East London ICC.
Image: MICHAEL PINYANA

The ANC in Eastern Cape is expected to announce its new leadership later on Monday after voting for the top five positions finally got underway in the early hours of the morning.

Former chair Oscar Mabuyane is going up against Babalo Madikizela as both men accepted nominations late on Sunday night.

Finance MEC Mlungisi Mvoko is going up against former OR Tambo chair Xolile Nkompela for the position of deputy chair.

For the position of secretary Lulama Ngcukayitobi is competing against Terris Ntuthu as both men accepted the nominations, while speaker in the legislature Helen Sauls-August and MEC of transport Weziwe Tikana-Gxothiwe will compete for the position of deputy chair.

Ex Nelson Mandela Bay councillor Andile Lungisa will go up against Zolile Williams for the position on treasurer.

Lungisa's bid for treasurer was initially appeared to uncontested until a nomination from the floor saw Williams vying for the post at the East London ICC.

Voting later got underway, following a long day of delays as delegates wrangled over credentials.

The debate on the credentials were marred by branch disputes and allegations of manipulation of delegates.

NEC deployee  and steering committee chairperson Dr Aaron Motsoaledi said 35 questions had been raised during the closed session on credentials but all had been dealt with.

"When the credentials were read, as normal and as expected delegates raised quite a number of issues, which they were not satisfied about," Motsoaledi said.

He said it was lately agreed that regional secretaries deal with the issues that had been raised and despite this, more concerns were raised by the delegates.

"We had to take a step and satisfy conference and that is why we went to that urgent steering committee meeting.

"The issues that were raised were about the authority of the court in the matter involving the Dr WB Rubusana region. There are a lot  of people who are challenging the outcome of judgment in Rubusana and what it implies," Motsoaledi said.