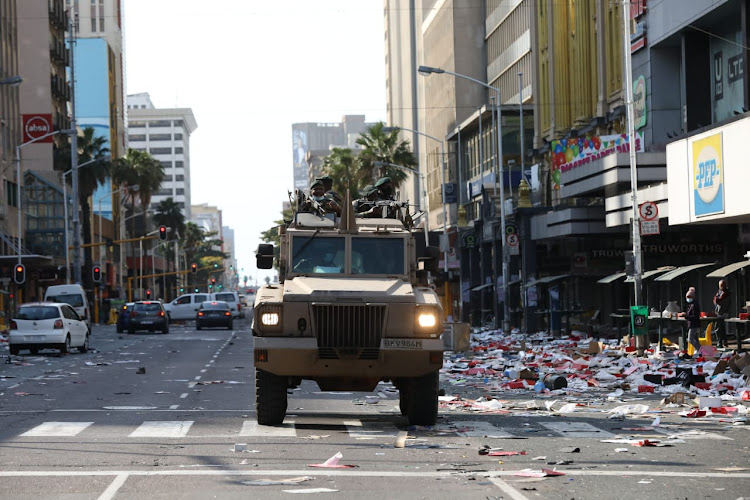 The SANDF on patrol in Durban during the riots and looting in July 2021. File image.
Image: Sandile Ndlovu

The SA Police Service says it wants to train 10,000 of its members to be first responders in the event of flare-ups similar to last year's violent looting and civil unrest.

The police were heavily criticised last year when civil unrest erupted in KwaZulu-Natal and Gauteng.

The riots were sparked by former president Jacob Zuma being sentenced to 15 months' imprisonment for contempt of court after he failed to appear at the Zondo commission to answer allegations of state capture under his watch as the country's president.

After the violence, KZN premier Sihle Zikalala told a SA Human Rights Commission hearing on the matter that police were not equipped to deal with the unrest.

“They had no resources to deal with the public disorder, like water cannons, stun grenades. With water cannons, in fact, I can attest we were engaging with police, and they had made it clear that they did not have enough equipment,” said Zikalala, adding that they were not trained for such unrest.

President Cyril Ramaphosa had to deploy the army to reinforce the police, who struggled to contain the violence.

“They were overworked, not trained to deal with this kind of unrest and didn’t have resources,” Zikalala said.

In a reply to a parliamentary question by the IFP, police minister Bheki Cele has confirmed his department is now training police near hot spots to be first responders while they wait for public order policing members to arrive at the scene.

“Between July 2021 and March 2022, the target is to train members of the SA Police Service at police stations as first responders and [properly] equip them,” said Cele.

“Continual training of SAPS members at police stations as first responders and equipping them with crowd management equipment will reduce the risk of such incidents.”

He said the training will enhance the response time, as police station members will be closer to the incidents while they await the deployment of public order police units.