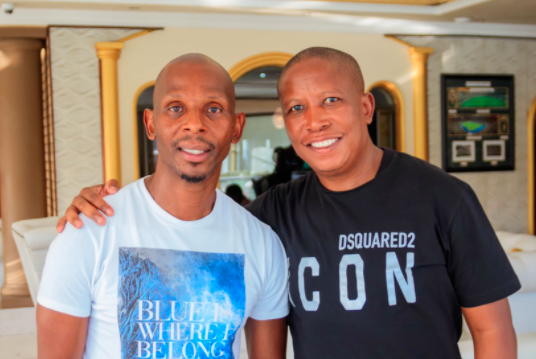 EFF leader Julius Malema has praised businessman Max Mqadi for his hustle and the success of his popular hangout spot in Umlazi, Durban.

In an appreciation post, on Monday, Malema said he was proud of his “brother” for being an example of black excellence.

“How do you go to Durban and not to Max’s Lifestyle in Umlazi? I’ve never made that historical mistake from the time when he was still operating his butchery in a shack. Very proud of brother,” said Malema.

How do you go to Durban and not to @maxslifestyle1 in Umlazi? I've never made that historical mistake from the time when he was still operating his butchery in a shack. Very proud of brother, #BlackExcellence. 🙏🏿👌🏾✊🏿👊🏿 pic.twitter.com/rs8lsTvo4H

The appreciation post comes after the establishment shut down Durban with its exclusive “All White Day Party” with guests including the likes of Somizi, Shauwn Mkhize and Norma Mngoma.

The event was attended by guests dressed all in white, sipping on champagne and showcasing their luxurious cars.

“KZN has more, my brother you have done well, painted the town white,” she wrote.

The party was held just a few months after Mqadi dodged death last year in an assassination attempt outside his renowned establishment.

The 51-year-old was shot by two unknown men at close range.

Police spokesperson Col Thembeka Mbele said Mqadi had climbed into his white Mercedes and was about to turn left onto Sibusiso Madekane Road when an unknown male suspect crossed the road and approached the left side of the vehicle.

“He opened fire on him (Mqadi) with a 9mm firearm. Another male suspect approached from his right side. The suspect that came from across the road, fired a number of shots at him, injuring only his arm and leg,” said Mbele.

At the time, pictures of the interior of Mqadi's bloodstained Mercedes and a bullet stuck in the back of his iPhone 12 made the rounds on social media soon after the shooting, with many under the impression his life was saved by his iPhone.