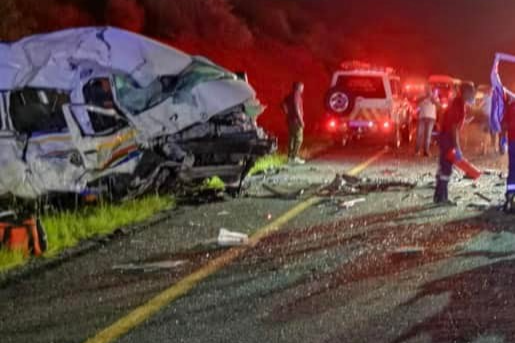 Nine people including two children died in a head-on collision between two taxis on the N2 near Makhanda on Sunday evening.

One of the taxis was travelling from Gqeberha to Mthatha with two occupants while the other was en route to Mossel Bay from Tsolo and was fully loaded.

Both the occupants of the Mthatha-bound taxi, a male and a female, died while two females, three males and two children, aged between one and four, died in the other taxi.

Eastern Cape department of transport spokesperson  Unathi Binqose said the fatalities were the highest recorded in a single accident during the festive season so far.

Transport MEC in the Eastern Cape Weziwe Tikana-Gxotiwe said it was concerning that there was yet another head-on collision involving taxis.

On Friday, six people died and nine others were taken to hospital after a head-on collision involving another two minibus taxis on the N9 between Graaff Reinet and Aberdeen at about 10pm.

The MEC called for patience on the road and urged motorists to drive cautiously.

The rest of the injured passengers involved in the accident on Sunday were rushed to a hospital in Makhanda.

A culpable homicide docket has been opened.