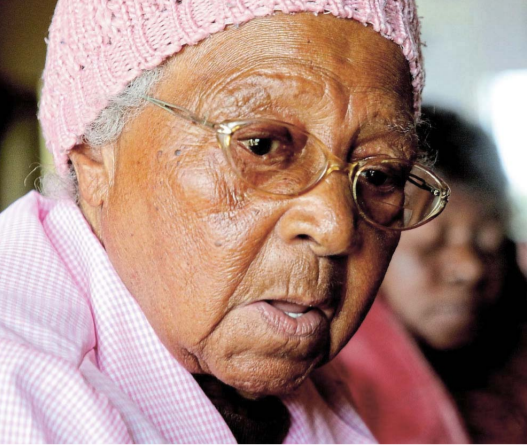 Tributes have poured in for ANC struggle stalwart Lillian Diedericks, who died at the age of 96 on Tuesday afternoon.

She was surrounded by family and friends as she took her last breath at her Gqeberha home, Diedericks’s daughter, Eugene Plaatjies, confirmed on Tuesday night.

“She was constantly complaining of tiredness,” Plaatjies said.

“I could tell that she was going to leave us and while we prayed for her, she passed on.

“We are going to miss her sorely but we release her.”

Celebrated for her contribution to SA’s liberation struggle, Diedericks was among the five women who led the 1956 march to the Union Buildings to protest against the pass laws.

Born in New Brighton in 1925, Diedericks’s family was forcibly removed from the township by the apartheid government, which  classified them as coloured.

She became politically active in the 1950s through her involvement with the Food and Canning Workers Union.

In 1956, Diedericks was arrested and charged with treason alongside other women for protesting against the then Port Elizabeth mayor.

They were taken to Johannesburg and jailed at Fort Prison. She was later banned from political activity by the apartheid government.

Diedericks had celebrated her 96th birthday on Friday.

Plaatjies said Diedericks and her family were honoured that the stalwart had still been alive to receive the honour.

“We were all so grateful that she was around to receive her flowers and not be honoured posthumously.

“Though she was old, the renaming of the state house made her very happy,” she said.

Plaatjies, Diederick’s only remaining child, said she would hold onto her mother’s fierce spirit.

“She was fierce to the very end.  One of the last things she said was that her feet were cold.

“I put her socks on but a few moments later she asked me to take them off her,” she said.

MP Cedrick Frolick said he had been to the family home in Gelvandale to offer his condolences.

“She led a significant life and contributed immensely to the struggle.

“Auntie Lilly remained rooted in her community and did not accept anything in return for the role she played.”

Frolick said what he would miss most about her was her straight talking.

“She was someone who called a spade, a spade,” he said.

Nelson Mandela Bay mayor Eugene Johnson said Diedericks was the kind of woman she was always eager to learn from.

Her fighting spirit, knowledge and courage were inspiring, Johnson said.

“We mourn [Diedericks’s] death. She was an honourable woman who was loyal to the ANC, even in her old age.

“When I visited her during our recent election campaign, she insisted that she wanted to be fetched so she could go cast her democratic vote.

“She was the kind of woman whose feet I wanted to sit at and learn as much as I could.

“It’s a great loss for the northern areas and the city at large,” Johnson said.

Mabuyane said: “We bid farewell to yet another colossal legend of our beloved Eastern Cape.

“We say rest in peace to Mama Diedericks, you have served your people with diligence, steadfastness, dignity, with your integrity and legacy intact.

“We convey our heartfelt condolences to the Diedericks family, and say that while there can be no immediate comfort to the passing of a loved one, take solace in the fact that Mrs Diedericks leaves a legacy you can all be proud of for centuries to come.”