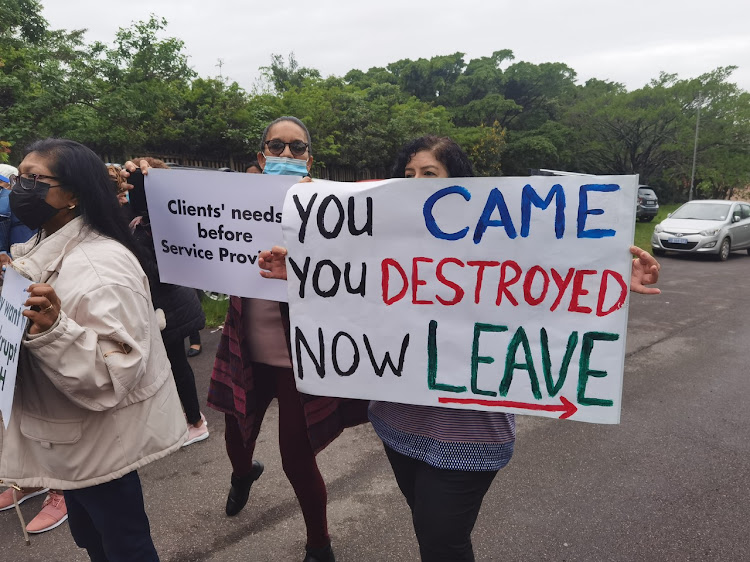 Staff protest outside the Durban and Coastal Mental Health headquarters against maladministration. Staff at a facility on the south coast didn't turn up for work on Thursday after not being paid. File photo.
Image: Supplied

Workers who care for 84 profoundly disabled people at Durban and Coastal Mental Health’s Jona Vaughan residential facility in Amanzimtoti did not arrive for work on Thursday morning, in protest against not being paid since September.

Parents Association of KZN treasurer Charmaine Maas told TimesLIVE that the association was trying to get volunteers to assist with cooking and caring for the residents in an attempt to avoid a “complete disaster”.

“There has been no bathing, no breakfast and nappies have not been changed. Residents were left alone when the night shift staff left.

“Our residents are profoundly handicapped ... they are on liquid diets and they require physical lifting,” she said.

“I have written numerous times to the CEO about this looming crisis. Yesterday I was accused of being racist.”

The no-shows this morning include carers, cleaners and kitchen staff.

Maas said the 42 staff members worked on split day and night shifts and she had no idea if the night shift staff would arrive for work later.

They had not been paid their October wages and were collectively owed about R174,000.

There were indications that they would not be paid for November.

Maas said in May last year the service provider (who employed them) had walked out because it had not been paid by DCMH.

Since then DCMH had been paying their salaries but now claimed that this money had come from subsidies from the Department of Health.

Maas said DCMH management now claimed that the department had not paid the subsidies.

She understood this was because of “concerns about mismanagement of funds”.

We’ve done everything in our strength to improve the conditions of our service users but the lack of funding currently worsens the situation.

DCMH chairperson Sthandiwe Mkhize said: “I’ve been reaching out to the department for renewed service level agreements. I’m still awaiting a response. Almost 50% of the service users at Jona Vaughan were abandoned by their families. They have nowhere to go. Without the financial support of  the department, it becomes an impossible task to look after DCMH residents.

“We’ve done everything in our strength to improve the conditions of our service users but the lack of funding currently worsens the situation.”

TimesLIVE previously reported on a report compiled by an investigations team appointed by the provincial department of health which found that DCMH’s board had been “captured” when it was taken over in 2019 and had been “brought to its knees” under the chairmanship of a disbarred attorney, Sipho Shezi, incurring debt of more than R18m in just two years.

It noted a revolving door of service providers, some appointed under questionable circumstances.

It warned of a looming Life Esidimeni crisis and recommended that:

Shezi has denied any wrongdoing. He says DCMH was already in a parlous financial state when he became involved and things deteriorated after he left in March this year.

The department has repeatedly failed to respond to queries regarding the status of this report and what action the department intends taking.

Regarding questions sent on Thursday about the non-payment of staff at Jona Vaughan, spokesperson Agiza Hlongwane said he would respond as soon as possible.

Events this week are just the latest in a list of issues facing those who use DCMH facilities.

Earlier this year, at its Sherwood residential centre, residents were reported to be starving after a service provider walked off site, locking up the kitchen, allegedly because of non-payment.

A dearth of carers left some lying in urine-soaked sheets.

This month, a resident of its Phoenix residential facility, died amid allegations that residents had been given old, previously donated food for supper because there was nothing else.

Internal reports indicated that several people had fallen ill after being given the food.

In a letter penned by the cook, in isiZulu, he apologised for what happened and says “we gave the children (residents) food which was five days past expiry date but which I felt had not really gone off”.