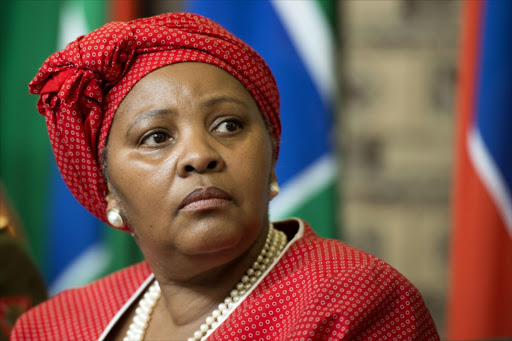 KwaZulu-Natal police commissioner Lt-Gen Nhlanhla Mkhwanazi went on paternity leave and was reluctant to share information with former defence minister Nosiviwe Mapisa-Nqakula and her executive during the July unrest.

Mapisa-Nqakula testified at the SA Human Rights Commission hearings into July's riots and looting in parts of KwaZulu-Natal and Gauteng on Monday, mentioning “egos” and an alleged lack of co-operation from Mkhwanazi and the police.

She said she was forced to deploy generals instead of colonels due to “an ego”.

When she arrived in KwaZulu-Natal during the unrest, she was confused when Mkhwanazi withheld information at a meeting and “spoke about a challenge” that had nothing to do with the riots.

She said she had daily conversations with President Cyril Ramaphosa from July 9 when the riots and looting erupted, and they decided that the army would not be deployed.

However, on July 11 Ramaphosa called her with a request to deploy the SA National Defence Force to KwaZulu-Natal and Gauteng where the riots had resulted in deaths, devastation and chaos.

She then contacted police minister Bheki Cele to ask him to send a letter in accordance with legal protocols for deployment of the army.

“The defence force is trained for crowd control. It is not trained to prevent people from committing crimes. The manner in which they have been trained is such that it is easy to find a situation where, instead of stopping what they are supposed to do, transgressions are committed, particularly because for some reason among our people in our communities, people get very excited when they see soldiers and they provoke them, just to see how they react. And this is the reason we made sure there had to be proper processes.

“You don’t just wake up and deploy. You think through reasons. You must know exactly why you are deploying the military. It must be a request from the police after a proper assessment has been done.

“And once the police decide, they make a request through the minister of defence, and, of course, the minister writes a letter, which is co-signed by the ministers of police and defence, for the attention of the president. So at that point, even the commander in chief himself [the president] ... cannot just take a decision on the basis of the letter,” she said.

However, soon after Mapisa-Nqakula and Ramaphosa decided that the army should not be deployed, the president called for soldiers on the ground.

Mapisa-Nqakula told the commission that at that stage the police had not called for the army.

After her conversation with Ramaphosa, she contacted Cele to co-sign the letter calling for the army.

She said the starting point for the deployment was at key points, because the police believed they could “manage crowd control”.

Soldiers were deployed at oil refineries in Richards Bay and trade routes between Gauteng and KwaZulu-Natal.

Her testimony is continuing.