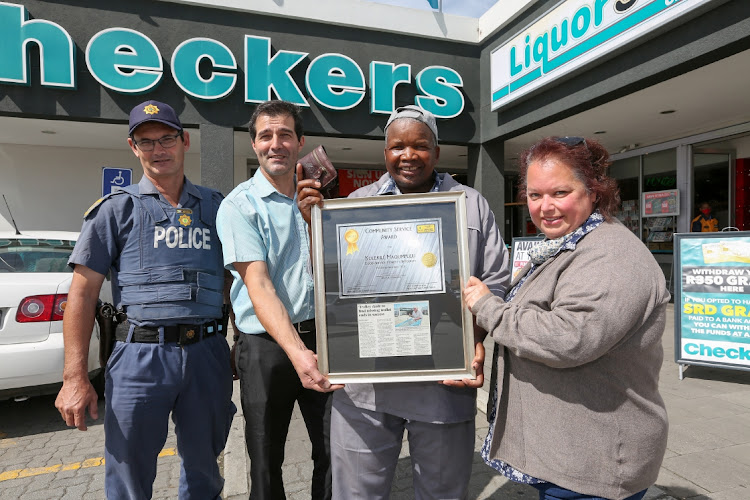 The last thing trolley jockey Kholekile “Elliot” Maquntulu had in mind when he returned a customer’s wallet which contained R700 was the public adulation that would follow.

“I would want that my children not hear negative things when people talk about their father,”  the Checkers trolley guard said.

Maquntulu was honoured by the Newton Park Crime Forum on Friday for choosing to do the right thing when no-one was watching.

The wallet had all of Viljoen’s cards, including her driver’s licence, and an enticing R700 inside.

He could have easily pocketed the money and disposed of the wallet, but instead  Maquntulu handed it over to his managers at the Newton Park Checkers to keep it should Viljoen return.

A very appreciative Viljoen gave Maquntulu R100 to thank him.

Newton Park Crime Prevention Forum’s Lisa Letord said they wanted to honour Maquntulu because they would like other people to know there is a reward for doing the right thing.

“Freddy van Wyk, the vice-president of the forum, came up with the idea to give him a certificate after hearing about Maquntulu’s story.

“He also had the same incident happen to him and also got his wallet back,” she said.

“I believe it is the third time someone had left their wallet and he returned it.

“Too many people say you will never get it [wallet] back.

“We need to thank people who do the right thing.

“We want to say well done, we appreciate your good work, it is recognised.”

According to branch manager Johnny du Toit, Maquntulu had returned three other wallets.

He said there was, in fact, another wallet at the store containing  R700 and he hoped to work with the police to trace the owner after not getting assistance from the bank.

“He didn’t and now he has scored bigger because he can live with this recognition for the rest of his life.

“He did not take the money and handed in the wallet.

“The money will [finish] now but what he did will be remembered for many years.”

Speaking on behalf of the SAPS, Captain Sandra Janse van Rensburg said at the presentation of the certificate: “It is a very good gesture and I hope other trolley guards will see the newspaper article and know there is a reward for doing good.

“The fact that he gave the wallet back makes him a person of integrity.

“I think he is a good ambassador for Checkers, not only because of this but how he carries himself and treats customers.”

Maquntulu said he just wanted to teach his children to do the right thing.

“I had to return it. I would want that my children not hear negative things when people talk about their father.

“They should hear good things so that they can learn.

“I am going to take this home and show them what happens when you do the right thing.

“When something is not yours do not keep it, rather return it. I am very thankful,” he said.