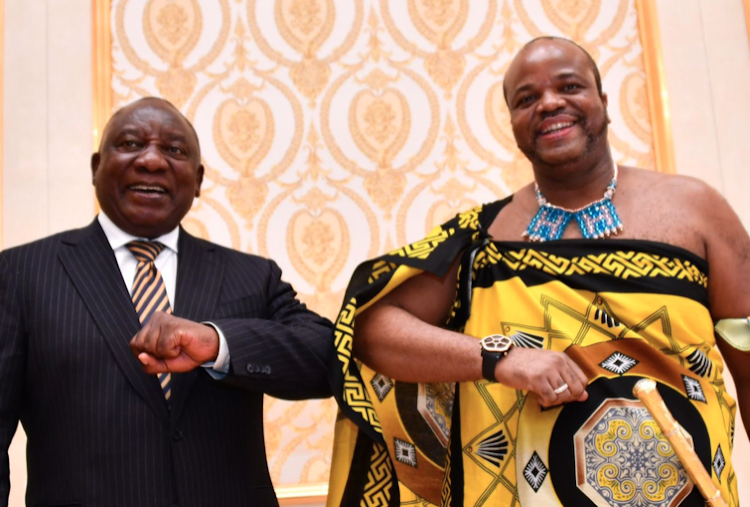 On Tuesday, Ramaphosa undertook a working visit to Eswatini for deliberations on political and security developments in the kingdom.

According to the presidency, Ramaphosa would have an audience with King Mswati III.

This comes after a visit to the kingdom by special envoys in October, who had been directed to visit Eswatini by Ramaphosa in his capacity as chair of the Southern African Development Community body on politics, defence and security.

[PHOTOS]: His Excellency President Cyril Ramaphosa, in his capacity as Chair of the SADC Organ on Politics, Defence and Security meeting with King Mswati III at the Royal Palace in the Kingdom of Eswatini for deliberations on political and security developments in the Kingdom. pic.twitter.com/1oJSvI0b6B

“Tell Cyril there are elections at home and ANC is not doing well,” she said.

“A whole Cyril leaving the country in the middle of an election... hayi, this man doesn’t see us.”

In a separate post, Zuma-Sambudla said Ramaphosa left the country because “he isn’t even bothered” by the number of votes the ANC garnered during the elections.

“We can’t be shocked by the numbers. [Former] president Zuma warned us of the plan to destroy the ANC ... The only winner here is Cyril. His mandate from WMC (white monopoly capital) has been delivered, that’s why he isn’t even bothered, he left the country,” she said.

This is not the first time Zuma-Sambudla has taken a swipe at Ramaphosa and his leadership of the ANC.

Last month, she gave voters an ultimatum to choose between the ANC and Ramaphosa, suggesting that the ruling party needed rescuing.

She said there was no way Ramaphosa and the ANC could be saved simultaneously, and one had to go.

“Fact, you can’t rescue both President Ramaphosa and the ANC at the same time, one has to go. You choose,” said Zuma-Sambudla.