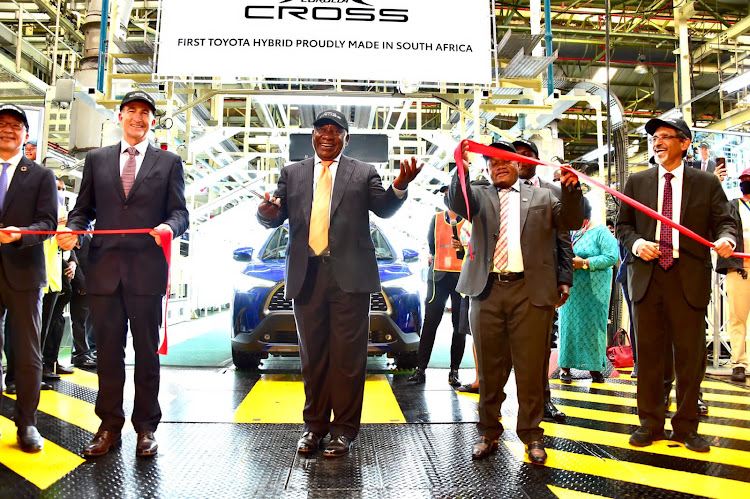 President Cyril Ramaphosa joins Toyota SA to celebrate the production of the new Corolla Cross ahead of its local media launch.
Image: Supplied

The launch of the Toyota Corolla Cross vehicle in Durban, KwaZulu-Natal could not have come at a better time as SA gears up for next week’s COP26 climate change conference,  President Cyril Ramaphosa said on Tuesday.

The conference will be held in Glasgow, Scotland, between October 31 and November 12 and countries will present their targets to transition to a green economy in response to the climate change crisis.

Ramaphosa said the launch of the vehicles, which operate on fuel and battery support, is an important step to transforming the car-making business into “a green industry success story”.

He said the Corolla Cross will be exported to 40 countries across the continent to help give green options to consumers. He said the company plans to ramp up its projected 4,000 hybrid vehicles planned for next year, depending on whether the availability of the batteries improves.

Why is this important for SA?

This will make clear SA’s commitment to contributing its share towards a global low-emissions, climate-resilient economy and society.

On Tuesday Ramaphosa said SA had identified three focal points to achieve this goal, including having Eskom reduce its carbon emissions and for local production of electric vehicles.

The department of environmental affairs said last month SA will call on leaders of developed countries to offer financial support that will enable its transition to a green economy.

“Some of the specific areas where we require immediate support include repowering and repurposing of retiring coal plants, investment in new low carbon generation capacity and transmission and distribution infrastructure,” it said.

“The first phase of the transition support electric vehicle (EV) manufacture in SA is a critical transition pathway for the automotive industry and support for an export-oriented green hydrogen industry based on low cost renewable energy.”