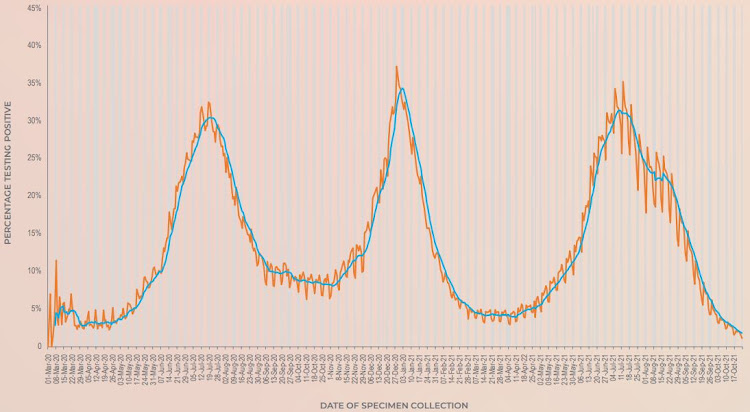 The blue line, indicating the seven-day moving average of the percentage testing positive, has reached its lowest point since the start of the Covid-19 outbreak in SA.
Image: National Institute for Communicable Diseases

The proportion of positive Covid-19 tests has reached its lowest point since the start of the local outbreak.

Only 1.8% of tests carried out in the week ending October 23 were positive, the National Institute for Communicable Diseases said on Wednesday.

The figure for the previous week was 2.6%.

Of the 173,184 PCR and antigen tests performed over the seven days to Saturday, only 3,153 were positive.

This is 33% lower than the number of positive tests in the previous week, and coincides with the number of active cases countrywide reaching its lowest point since the local outbreak’s early stages.

This was day 92 of the local outbreak, while Tuesday was day 605.

The weekly percentage testing positive for Covid-19 in each province. The horizontal blue line shows the national mean for the week ending October 23 2021.
Image: National Institute for Communicable Diseases

The percentage of people testing positive last week decreased in all provinces except Mpumalanga and Limpopo, where it was the same as the previous week.

The highest positive rate, 5.7%, was in the Northern Cape, while it was below 5% elsewhere.

By comparison, the national positivity rate reached 31.7% at the beginning of July as the peak of the third wave produced a record 211,052 active cases.

The finding comes just days after the health department made vaccinations available to those aged between 12 and 17.

By Tuesday, 74,182 children in this group had been vaccinated.