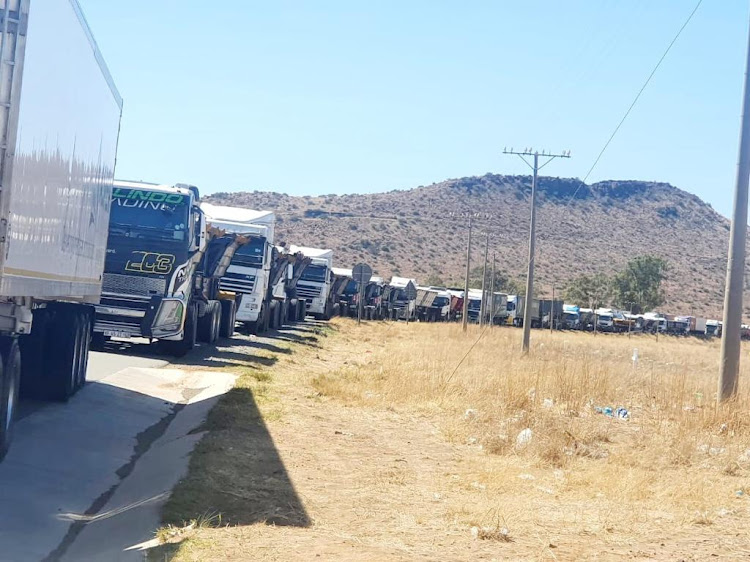 Congestion is easing on the N10 after a memorandum was signed between the protesting truck drivers and minister of transport Fikile Mbalula.

The busy stretch of road near Middelburg in the Eastern Cape had been blocked since Sunday by truck drivers and operators demanding the re-registration of foreign national drivers.

The blockade had particularly affected trucks transporting manganese destined for export, moving from Kuruman in the Northern Cape to the Gqeberha harbour.

Mbalula, along with employment and labour minister Thulas Nxesi and transport MEC Weziwe Tikana-Gxothiwe, spent much of Monday negotiating an end to the impasse.

The strike officially ended at 8pm on Monday after a memorandum was signed.

It was agreed that:

Tikana-Gxotiwe’s spokesperson, Unathi Binqose, said: “Though the memorandum was signed last night [Monday], the operators requested that they start moving their vehicles at 6am on Tuesday because it would be dangerous to start driving in the dark.

“They started moving as soon as there was light.

“We are still advising motorists to avoid the area where possible, however, we expect it to operate normally by midday.”

He said the resolution reached was proof of the commitment shown by the minister and the MEC.

“They spent the whole day with the drivers trying to find a resolution with the representatives of the drivers.

“They have committed to look into the issues raised by the drivers but because the main complaint was about the employment of foreign nationals, they communicated that the government was limited in its intervention because it was not the employer.

“However, there are plans to clamp down on those without proper documentation.”

The memorandum was signed by the ministers, the MEC and truck driver representatives.