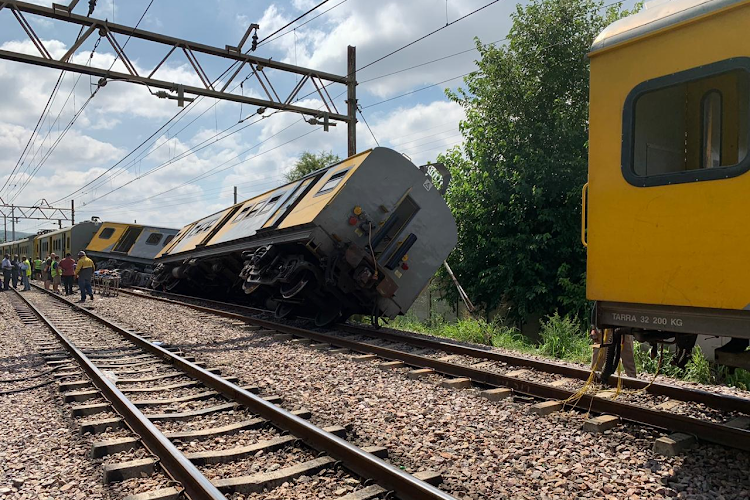 The Railway Safety Regulator recorded fewer operational occurrences, such as derailments, on the country's rail network in 2020/21, but this is as rail operators produced significantly fewer kilometres as a result of lockdown restrictions. File photo.
Image: Supplied

There were fewer operational occurrences and security-related incidents on the railways during the 2020/21 financial year compared to 2019/20.

However, this should not be cause for celebration as the combined traffic levels of the train operators declined by 38% during that period compared to the previous year.

Deputy transport minister Sindisiwe Chikunga made this remark on Wednesday during the release of the Railway Safety Regulator’s (RSR) annual state of safety report.

She said this year’s report was presented against the backdrop of the Covid-19 pandemic and its impact which led to major operators producing significantly fewer rail kilometres in the 2020/21 year.

While security-related incidents were also down year-on-year, the deputy minister denounced the ongoing destruction of rail infrastructure and highlighted the importance of implementing security plans aimed at curbing the scourge.

She said 10,076 negative events were reported during the 2020/21 reporting period, with 2,024 relating to operational occurrences and 8,052 attributed to security-related incidents.

Chikunga said there was a 15% decrease in total train derailment and 13% decrease in level crossing occurrences in 2020/21 when compared to the previous year.

There were fewer operational occurrences and security-related incidents on the railways during the 2020/21 financial year compared to 2019/20.
Image: Railway Safety Regulator’s State of Safety Report

“Even though collisions and derailments depict a year-on-year decrease, when you consider the normalised figures which take into consideration the train kilometres, this shows an increase.”

“However this happens during the year when passenger activity was restricted across the railways.”

“These numbers attest to the fact that we must stay focused and ensure that through our collective efforts, we concretely drive down the number of occurrences and prioritise the safety of both commuters and workforce in our operations,” Chikunga said.

RSR chairperson Johannes Nobunga said when the lockdown was imposed early last year, there was a significant increase in security-related vandalism and theft of rail infrastructure.

Gautrain Management Agency CEO William Dachs said the impact of the lockdown has largely been in terms of the lower number of passengers using its service. He said Gautrain has been able to keep its safety and security levels intact.

Prasa Group CEO Zolani Matthews said the lockdown has seen it suffer large-scale incidents of theft and vandalism of its infrastructure.

TFR CEO Sizakele Mzimela said although the service was affected during lockdown level 5, it was able to operate as it was moving essential goods and saw few incidents of theft and vandalism during level 5. However, TFR saw an increase in theft and vandalism when lockdown restrictions were lifted, she said.

Mzimela said over the past five years TFR has seen an increase of 177% in theft and vandalism on its lines.

In the past year, TFR spent in excess of R1.6bn to protect the lines.