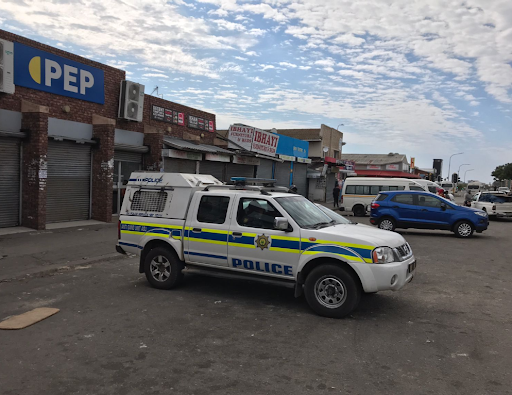 ON WATCH: Police are monitoring the situation in Durban Road, Korsten after several vehicles were set alight on Wednesday afternoon
Image: Werner Hills

Clean up operations got under way in Durban Road on Thursday, in the wake of the pandemonium which saw taxis being torched and gunshots fired.

The violence that erupted shortly after 2pm on Wednesday caused pedestrians, shoppers, and motorists to scatter in all directions.

On Thursday, a team of the Nelson Mandela Bay Municipality was at the taxi rank clearing the debris where eight taxis had been burnt.

All of the shops along Durban Road were closed for business on Thursday.

Staffers who showed up for work told The Herald they were told to go home.

According to commuters there were fewer taxis travelling from the township to Korsten on Thursday morning.

A landlord in Zwide tries to clear up after his tenant's shop - in a modified garage on the property - was set alight on Wednesday night. The shop owner, an Ethiopan man, allegedly fled when the shop was set alight, reports Riaan Marais.
📷 @ecoetzee pic.twitter.com/5dcrXjuGWf

Business owners, members of the taxi associations and the police are in discussions behind closed doors at the Thanda Bantu store to discuss a way forward.

It is understood that an accident involving a taxi and an Audi earlier in the day triggered the unrest.

Moments after the accident, a physical altercation ensued.

Some witnesses said taxi drivers retaliated after one of their colleagues had been assaulted.