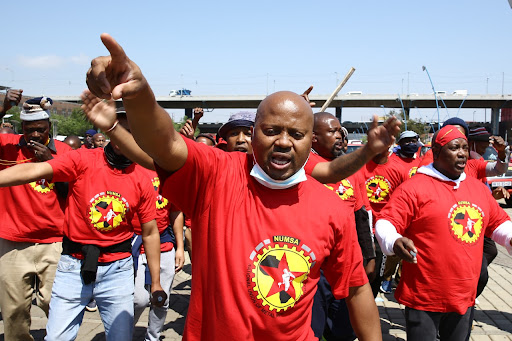 The National Union of Metalworkers of SA (Numsa) says there are major issues at SAA, prompting a picket by its members and the SA Cabin Crew Association (Sacca).

Not even a month into its relaunch, Numsa spokesperson Phakamile Hlubi-Majola said “old SAA habits were creeping in again” and workers were upset by the new conditions “imposed on them”. They complained that managers were receiving preferential treatment.

SAA’s Vimla Maistry said the airline had hoped to keep the dispute out of the media but had been forced to comment after Tuesday’s picket. She said the rumours that managers were being given pay increases were untrue.

“There is no money to pay people fantastic salaries. We all took a pay cut [of about 30%] and pilots had their pay cut by 50%. The world is watching and it is not a good thing to put the company into disrepute. It is not right and as a country we can’t do this. The whole economy is in dire straits because of Covid-19.”

Speaking to TimesLIVE on Wednesday, Hlubi-Majola said the new working conditions were deplorable.

“They’ve had their salaries slashed by 30% and cabin crew work eight to nine hours without a lunch break. To be at work at 6am they take the Gautrain, leaving home at 4am. There is no eating on the train so they fly and return and have no lunch break until they get home.

“There are no breaks and no money and people are working to the bone. Some of them have been working at SAA for 30 years and this is the reward.

“There are 250 managers and 750 employees. What’s the difference [from the way the airline was run]?” she asked.

“The reason we picketed was because managers refused to meet us, even though they claim to have done so.”

Numsa and Sacca alleged in a statement on Tuesday: “We work for nothing while elite managers and specialists benefit from this restructuring. They have taken bread away from our mouths. We can no longer afford to come to work, we cannot afford to put food on our table. We have lost our houses, we can no longer afford to make a living from our jobs, but for the executives and management who made decisions which led to the collapse of the old airline, their salaries have increased.

“We are being treated like beggars by SAA management and are being told to be grateful we have jobs. We decided to stay because we love SAA. We are not staying to be abused by management.”

According to the statement, members asked for urgent engagement regarding:

After a two-hour protest at head office in Johannesburg, SAA said in a statement: “During the hiatus, SAA consulted widely with all stakeholders, including union and non-union employees, and is confident all new agreements reached with parties either in a collective or individual capacity were negotiated fairly and equitably.

“While SAA recognises and respects the rights of people to protest, the carrier is not able to revert to prior agreements reached before business rescue.”

In an internal memo to staff, CEO Thomas Kgokolo hit back.

“SAA has undertaken to review salaries and employment conditions in the first quarter of 2023. All changes to terms and conditions of employment were done in line with labour legislation and were meant to make SAA productive, competitive, efficient and viable.

“SAA will always listen to concerns raised by employees and, where necessary, make relevant adjustments. SAA will, however, ensure adjustments are in the best interest of the company and all employees.”

Meanwhile, the protracted Numsa strike in the metal and engineering sector is yet to be resolved after talks on Tuesday needed to be communicated to members, according to Hlubi-Majola.

Numsa is demanding an 8% pay increase across the board in the first year, 2% plus CPI improvement factor in the second year, and an opportunity to reopen negotiations if 2% plus CPI does not cover inflation in the third year.