New Brighton man missing for more than a year 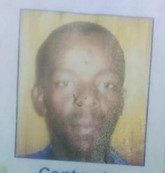 Police are requesting the public’s assistance in locating Siyabulela Heshu, who has been missing for more than a year.

Heshu, 30, was last seen in New Brighton on August 15 2020, after an alleged altercation with his brother.

“Siyabulela Heshu was last seen leaving his home in Tsewu Street, New Brighton, allegedly after an argument with his older brother.

“There were rumours that he was seen near a petrol station seeking employment in July 2021,” she said.

“Siyabulela’s sister reported him missing at SAPS New Brighton after she was unable to trace him.”

Alternatively, contact  Crime Stop on 08600-10111 or the nearest police station.