‘He served with integrity’: Mzansi reflects on Mogoeng Mogoeng’s time as chief justice 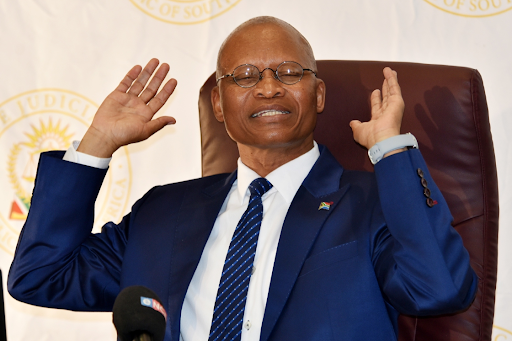 Mogoeng Mogoeng has been described as a leader who served with integrity as many reflected on his time as chief justice on his last day of office on Monday.

Mogoeng’s 10-year term was preceded by his appointment as a judge of the court in 2009.

Mogoeng was, according to the Constitutional Court website, the fourth chief justice of SA since the dawn of democracy in 1994.

President Cyril Ramaphosa thanked Mogoeng for his outstanding leadership through which he advanced accountability.

“Following a decade of outstanding service and leadership, chief justice Mogoeng leaves a rich legacy for our democratic culture, our judiciary, the legal profession and ordinary South Africans.

“Chief justice Mogoeng’s leadership inspired a judiciary that was fearless in holding those in power to account and empathetic to the plight of individuals and groups in our society.

“This has deepened international regard for SA jurisprudence, for the integrity, effectiveness and efficiency of our democratic institutions, and for the separation of powers enshrined in our constitution,” said the president.

The IFP also thanked Mogoeng and conveyed well wishes to the next chief justice, who has not yet been appointed.

A man who took an oath and served with integrity. Have a blessed journey Chief Justice Mogoeng Mogoeng. Re ikganya ka wena. pic.twitter.com/oeGCNPpGCB

Mogoeng Mogoeng you did not compromise the truth you stand for. You served the Nation with distinction 🌠 and you deserve to be honored. We celebrate you! We salute you!..... Farewell CJ 🙏 pic.twitter.com/M7p7cczhgf

Farewell Chief Justice Mogoeng Mogoeng. History will remember you as a man who stood his ground and served with integrity 🇿🇦 What a man 💫 pic.twitter.com/nuJquJfK1x

Chief Justice Mogoeng Mogoeng was not taking chances when he accepted the nomination to become Chief Justice. He was capable and he knew it. He stood firm for everything he believed in even when he was mocked and insulted. We are grateful for this man♥️🙏🏽 pic.twitter.com/upITdBPfe0