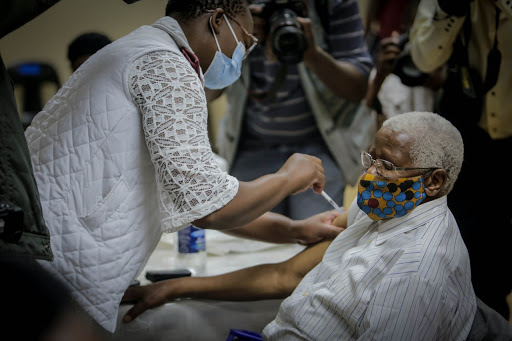 People over 60 who had received Covid-19 vaccines during the Western Cape's third wave peak were far less likely to die, be hospitalised, or become ill.
Image: Sebabatso Mosamo/Sunday Times

These are some of the reasons SA has yet to reach its vaccination targets, according to the research findings of the Solidarity Fund and the national health department.

The department and the fund launched the #RollUpYourSleevesSA campaign on Friday with the aim of encouraging at least 28-million people to get vaccinated against Covid-19 at least once by the end of the year.

The fund’s executive head for humanitarian response and behaviour change, Wendy Tlou, said despite two-thirds of SA citizens saying they intended to get vaccinated, this had not happened.

“The campaign elements that have been developed aim to address the concerns and issues around why many of the people who say they intend to get vaccinated are not actually doing so,” Tlou said.

“It was therefore crucial that this campaign is data-driven.

“We have looked at some of the attitudes, behaviours and perceptions around vaccines, talked to scientists and researchers who are experts in the fields of epidemiology and immunology, among others.

“And then [we] developed a campaign around this information with a view to increasing the understanding of the science around vaccines and why there needs to be a greater and more urgent uptake if SA is to overcome the pandemic.”

The campaign is modelled on a demand-creation and community-mobilisation approach that uses a number of television commercials featuring ordinary South Africans heeding the call to get vaccinated .

It also employs a range of corporate, government and civil society partnerships, including community-and-faith based organisations, and more than 1,000 community mobilisers who will be working in townships, towns, cities and rural areas to engage with people.

Harrison said: “We are seeing rates of vaccination going up but not quickly enough for us to save lives and livelihoods should the anticipated fourth wave of the pandemic occur.

“The launch of the Vooma weekend campaign at the beginning of October drove up the numbers of those vaccinating over that weekend but this has to be sustained, and even increased, if vaccines are to have a positive impact. ”

Visit www.sacoronavirus.co.za/active-vaccination-sites/ to find out where to get vaccinated.

Vaccination sites are open countrywide between 7am and 5pm on weekdays and from 8am to 6pm on weekends.