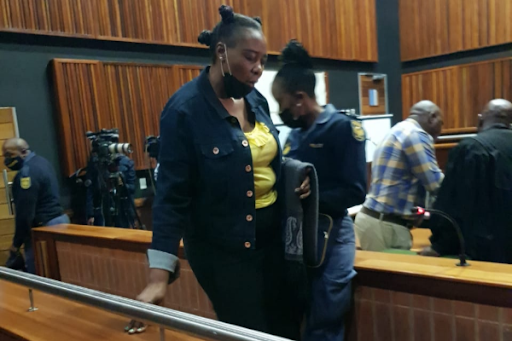 When the state confronted Nomia Rosemary Ndlovu about contradicting her evidence, she shifted the blame to her defence counsel and state witnesses.

On Friday, the state began cross-examining Ndlovu, who is accused of a string of crimes relating to her allegedly killing six people, and plotting to kill seven others, allegedly to cash in on insurance policy claims.

Ndlovu was arrested after Njabulo Kunene turned to the police, informing them that Ndlovu had allegedly recruited him to commit murder. The police set up a sting operation which ultimately led to Ndlovu being caught on camera while allegedly detailing what she wanted done.

Prosecutor Riana Williams asked her why she, Kunene and his sister Cebisile had travelled to Bushbuckridge. Ndlovu said she had gone with the two siblings to take them to a sangoma.

“What I don’t understand is that Njabulo did not testify that you drove to Bushbuckridge due to their problems,” said Williams, reminding her of the video clip in which she is heard telling an undercover police officer that they should burn her sister with her five children.

“The first video clip was you discussing killing someone,” Williams said.

“Njabulo said the person we were going to travel with was a thug who liked money. He said instead of saying we are going to a traditional healer, we should tell him we were going to kill my sister and get money,” Ndlovu responded.

Williams put it to Ndlovu that her defence lawyer did not confront Kunene with that version.

“I told my counsel that I was accompanying Njabulo to see a traditional healer. I don’t know why my counsel did not do anything about it,” Ndlovu said.

“Either you did not tell him or he did not know,” Williams said.

“I told him and he said we would use that during arguments,” Ndlovu said.

Williams quizzed Ndlovu on the funeral and life insurance policies she had taken out for her relatives.

Ndlovu confirmed her statement in her affidavit that she took out the policies to assist her relatives with funeral arrangements because they were poor. She said she did not want them to be a burden on her when they died.

One of the people she had covered in a policy was her cousin Witness Madala Homu. She was covering funeral policy payments for Homu, who was found dead on April 1 2012.

Williams asked her about the documents she completed to claim for Homu’s death. In the documents, Ndlovu had allegedly identified Homu as her spouse.

“You admitted the documents had your handwriting,” said Williams.

“Yes, it is my handwriting,” Ndlovu confirmed.

She said when she took out the policy, she did so telephonically and only completed forms when she was claiming for Homu's death.

“When you submit a claim, they send you documents to fill out. They asked me how I was related to the deceased. I told them he was my cousin but they said according to their records, it was written ‘spouse’. They told me to write spouse.”

“You are a police officer. At the bottom of the form, there is a declaration that the contents of the form are true and correct. Why did you lie on a document you signed?” asked Williams.

“I did not do it,” Ndlovu answered.

The court heard Ndlovu had taken another policy for Homu and had again registered herself as a spouse and not cousin. When confronted with this, Ndlovu said: “Maybe it was their mistake. They wrote spouse. I did not.”

Ndlovu said she had received R131,000 from insurance policies she had taken out for Homu. Asked what she did with the money, Ndlovu said she bought food for Homu’s funeral and gave his mother R15,000.

Williams, however, told Ndlovu that in her bail affidavit she had said she did not give Homu’s mother the money because the family did not involve her in the rituals on the morning of the funeral. They also did not allow her to go to the funeral.

According to the state, Ndlovu claimed in her affidavit that Homu’s mother demanded policy payouts in respect of Homu.

“I did not write the affidavit myself. The lawyer who represented me did,” Ndlovu responded.

She said she gave Homu’s mother R15,000 two weeks after the funeral.