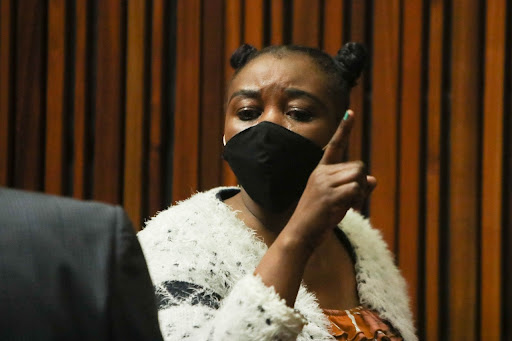 Ndlovu gestures to members of the media after giving testimony during her court appearance on September 14 2021.
Image: Alaister Russell/The Sunday Times

Murder-accused Nomia Rosemary Ndlovu faced a test of her testimony in court on Friday as the state accused her of lying about her late niece's medical condition.

Ndlovu, a former police constable, is accused of a string of crimes including allegedly killing six people, and plotting to kill seven others, to cash in on insurance policy claims.

She was first questioned about the death of her cousin, Witness Madala Homu. The state then pressed her on the circumstances surrounding the death of her niece, Zanele Motha, who died on June 15 2016.

Motha was found severely injured on the side of a road in Kempton Park. She was declared dead on arrival when she was admitted to the Arwyp Medical Centre.

Ndlovu told the court Motha had lived with her for a month before she died.

She said Motha would disappear for days because she was a heavy drinker.

In her bail affidavit, Ndlovu said: “She came to stay with me, leaving her three children and her boyfriend behind. She used to drink liquor. For that reason, I added her to my existing funeral policies.”

Ndlovu said when she heard Motha was in hospital, she went there to check on her.

“When I saw her she looked as if she was in pain,” Ndlovu said.

“I asked her what happened, but she did not respond. She was in a wheelchair. She could not stand up,” Nldovu said.

Prosecutor Riana Williams responded: “If she was not able to stand up, why did you not bring it to the attention of the nurses?”

Williams questioned Ndlovu's evidence on Motha being unable to stand up.

“Dr Nku, who came to testify, said she examined Motha. There were no internal injuries, just facial and soft tissue bruises,” Williams said.

Ndlovu said when Motha was discharged, she took her to her place where she helped her bath and gave her food.

“I heard her coughing. I went to check on her. I found her kneeling on the floor,” Ndlovu said.

She was rushed to the Arwyp Medical Centre, where she was declared dead.

The case was postponed until Monday.