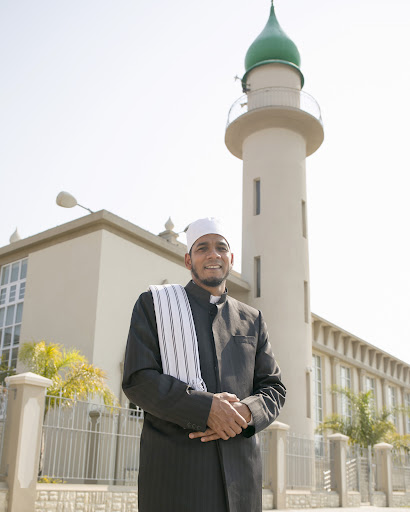 Sheikh Mukhtar Raban has been appointed head imam (leader) at Masjidut Taqwa, the largest mosque in the Eastern Cape.

Raban, 36, one of the youngest imams to be appointed at a main mosque, is the third imam to take leadership of the iconic Bay mosque since it was established in Gelvan Park in 1972.

He follows Sheikh Shamiel Panday, who served as the imam for more than two decades.

Masjidut Taqwa was the first mosque to be built in the city’s northern areas after the forced removal of non-white communities from South End and surrounding areas during the apartheid regime.

Raban is a lecturer in the faculty of humanities at Nelson Mandela University and holds degrees in Arabic Linguistics and Shari’ah (Islamic law) from the Islamic University of Madinah in Saudi Arabia.

He has also obtained a master’s degree in education from Stellenbosch University and is pursuing his PhD with the University of Cape Town.

He is a research fellow in the Centre for Innovation in Learning and Teaching at the University of Cape Town, while running online Islamic courses through the Al-Arqam Institute in SA.

He heads the teaching and learning of the largest online Islamic university globally, the International Open University, and is a member of the Muslim Judicial Council of SA.

According to Ighsaan Gamieldien, the chair of the board of trustees of Masjidut Taqwa, Raban is the ideal candidate to take over the reins at the mosque.

“Sheikh Mukhtar is a young, dedicated and focused individual.

“He is a visionary leader and a strategic thinker who sets clear objectives and goals.

“He connects well with diverse groups of people and is approachable to people at all levels and age groups,”  Gamieldien said.

Despite his busy schedule, Raban said that he was extremely grateful for the opportunity to lead and serve the community.

“I am humbled to be awarded with this honour,”  Raban said.

“This job comes with significant responsibility and I am ready to assume this role to the best of my ability.

“I grew up attending this mosque and I have established solid relationships with senior leaders and community members who have supported this mosque over the years.”

The father of three is a founding member of the IFM Community Radio station in Nelson Mandela Bay and has served Muslim community radio in the metro from a young age.

He matriculated from Nasruddin Islamic High School, after which he furthered his studies in Saudi Arabia.

Raban has been back in SA for 10 years and during this time he has completed a number of research studies, including the origin of the Eastern Cape Malay heritage.

He also delivered academic papers at various international forums and continues to provide sermons and guest lectures in the community.