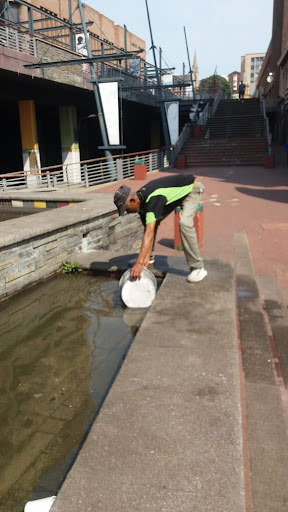 HISTORIC RESOURCE: Taxi driver Andre Felix, 53, collects water from the Jetty Street fountain to wash his vehicle. The fountain at the bottom of the Route 67 Nelson Mandela memorial was probably created from the well that was sunk on the spot in 1860
Image: GUY ROGERS

The Nelson Mandela Bay municipality’s water team is set to visit several sites along the Gqeberha coast next week to plan the drilling of new boreholes for drinking water.

Existing municipal boreholes in the area have been used for irrigation, but as part of its efforts to counter the drought, the metro is continuing its search for fresh potable supplies.

The plan shines a light on the fascinating phenomenon of Gqeberha’s coastal springs which pop up in various spots through the old CBD and west along the beachfront.

One of the spots is beneath historic Newspaper House on Baakens Street, where a pump works 24 hours a day every day to push water out from under the building and into the nearby stormwater drain.

Another is in Lower Valley Road where even in the driest weather water seeps down from a spring on the high ground just up from the Tramways Building.

A culvert channels most of the flow down to the Baakens River, but the road at that point is almost always wet where excess water has fanned across it.

Geologist Dr Marc Goedhart said on Thursday the water was probably derived from as far inland as the Theescombe area on Gqeberha’s western rim.

“Rainwater infiltrates the dune sands there and percolates down to the underlying quartzite bedrock. Then, over a period of a few centuries, it seeps eastward towards the coast both at the interface of the bedrock and within fractures in the rock.

“At the coast the seawater, which is denser than freshwater, wedges into the aquifer and pushes this incoming seep up to the surface.

“The seawater wedge is like a chisel and the shavings from the chisel are the freshwater springs which occur in the area.”

Goedhart said the Gqeberha coastal spring phenomenon was constrained by both the distribution of the inland seepage and the fractures in the quartzite underlay.

“In this case, the bedrock stretches from Mount Road to Cape Recife and it’s in that area where you will see these little springs popping up.

“We know that historically crews from ships used to collect water from a couple of them in the lower Baakens River Valley.”

However, he said circumstances had changed, making further harvesting not so straight forward.

“We now have a city overlaying this resource.

“There could be various pathogens in it now that would reduce its immediate availability as drinking water.

“Our ageing infrastructure and the resulting sewage leaks are a big problem in this regard.

“If we could get all this infrastructure ship shape and get our city clean then it might be feasible to look at harvesting this water.

“Individual land owners can apply to extract it in the meanwhile, but my advice is have it tested before you connect up.” 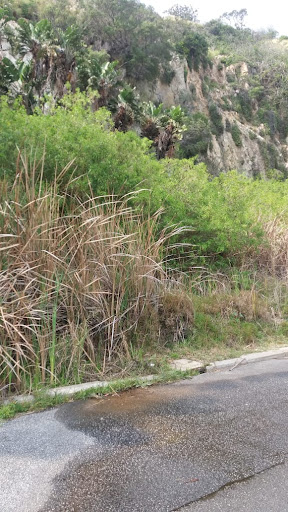 FAMILIAR LANDMARK: One of the city's springs is on the south side of Lower Valley Road, between the traffic circle and the Tramways Building. A culvert channels most of the flow down to the Baakens River, but the road at that point is almost always wet
Image: GUY ROGERS

Former Nelson Mandela Bay water supply and distribution manager David Raymer said there was a similar spring under The Beaches block of flats opposite Kings Beach and in Jetty Street near the harbour, where a drinking well was sunk in 1860.

As recorded in Raymer’s book about Port Elizabeth’s historic water supply, Streams of Life, further wells were sunk nearby in Brittannia, Grace and Alice streets.

Department of water & sanitation production scientist Ilse Chilton said the springs were protected under the Integrated Coastal Management Act and any activity involving them was strictly controlled by the Act.

“Some boreholes have punctured the groundwater resources and are left to run to waste, which is not desirable.

“A great concern is over-abstracting this groundwater and causing saltwater intrusion along the coastline, which will have a severe negative impact on the groundwater quality.”

Another water expert who asked not to be named said the Gqeberha coastal springs resource presented various possibilities.

“What about using the water from under The Beaches to spray down our manganese stockpiles instead of  the kilolitres of potable municipal water that Transnet uses to do this every day?

“Initiatives like that would help free up our drinking water supply.”

“The extraction volumes are low and they have historically been used for irrigation by the parks department, so the quality has not been tested.

“However, more boreholes for potable water use are planned following our next site visit on September 14.”

He said the exact positioning of the new boreholes, and how and where the water would be treated, would be revealed during the site visit.