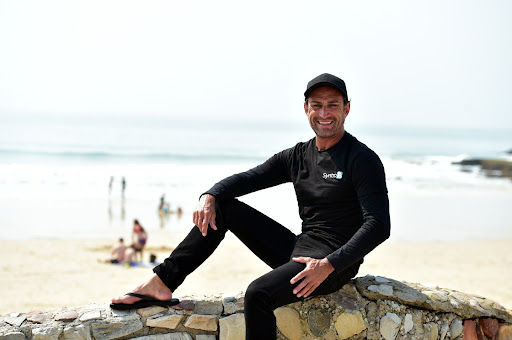 LATEST ADVENTURE: Gaven Sinclair will be running from Gqeberha to Cape Town along the coast to motivate people to keep active and fit
Image: EUGENE COETZEE

He has cycled from Cape Town to Cairo and run thousands of kilometres across four countries for charity — and his next goal is to run along the coastline from Gqeberha to Cape Town from October 1.

The aim, South African adventurer Gaven Sinclair said, was to encourage fitness and healthy lifestyles among the public.

Sinclair will run along the coast for 30 days, making stops in various towns along the way to spread the word through media tours and community engagements.

“At the moment, our nation is really struggling, with a lot of people under stress due to what’s been happening for the last year and some months,” Sinclair said.

“We are trying to encourage people to take good care of themselves and live healthier lifestyles.

“And for people who have been diagnosed with chronic diseases, we want to remind them that it doesn’t mean they should stop living.

“They can still turn off the TV and walk or exercise.”

He is doing the solo run for the Syntro-P Wellbeing, a health and wellness company focused on reimagining the treatment of non-communicable diseases.

Sinclair, an avid runner, said the cause was aligned to his own lifestyle.

“Health and wellbeing is something that’s been a part of my life as far back as I can remember.

“For me, it’s all about living healthy, looking at holistic approaches to life and  looking at the more natural treatments.

“It’s very important to have a balance in our lives and fitness is a key aspect in keeping us healthy and balanced as human beings,” he said.

From September 2018, he ran  4,000km,  across four African countries over seven months.

The run started in KwaZulu-Natal to Mozambique’s southeast coast.

He then headed for Botswana and Namibia before running south from Walvis Bay towards Cape Town.

In 2020, he ran 388km along the coastline of Mozambique from Macaneta Island to Guinjata Bay.

The adventures were all to raise awareness of child trafficking and raise funding for Missing Children SA as the organisation’s ambassador.

Sinclair arrived in Gqeberha at the start of September to train for a month before starting his next run.

“I’ve been living in Mozambique but I’m back in SA this year. There, I did a lot of beach training.

“My daily resistance training was always on the beach, so technically I am conditioned to run on the beach.

“During my resistance training, I normally walk pulling two tyres behind me or slow run pulling one tyre.

“I also usually run with a weight belt and then, of course, when there’s a gym available, I do some strength training in the gym,” he said.

During his 30 day solo run, Sinclair will share a link for the public to track his progress.

He invites anyone interesting in joining him to run along when he reaches their area.