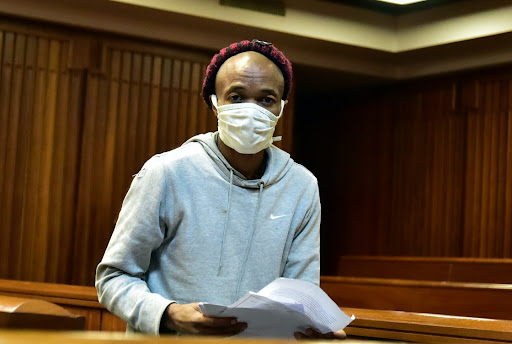 IN COURT: Alleged serial rapist Thembinkosi Ngcolomba  at an earlier appearance  in the  high court in Gqeberha
Image: EUGENE COETZEE

The trial of alleged serial rapist Thembinkosi Ngcolomba hit a further snag on Monday when it emerged in court that he would not be testifying as he had a pressing issue to attend to at the St Albans prison, where he is in custody.

While the nature of his problem was not elaborated on, Gqeberha high court judge Elna Revelas said before postponing the matter to Tuesday that Ngcolomba’s counsel, advocate Johan van der Spuy, had informed her that the issue could only be dealt with during court hours.

Revelas said after consulting with Van der Spuy in her chambers she found it only fair to allow Ngcolomba the time to sort out the matter, which was completely separate to the case before the court.

At the start of the trial, Ngcolomba, 33, pleaded not guilty to 12 counts of rape, nine of trafficking persons for the purpose of sexual exploitation and seven counts of robbery with aggravating circumstances.

It is alleged that between May 2016 and February 2018, Ngcolomba raped nine women, some more than once, after luring them to secluded spots near NU29, Motherwell, using an alias, on the “Umfula Wothando” (River of Love) Facebook page.

The state alleges that Ngcolomba used Facebook to strike up conversations with the victims before convincing them to meet up.

The woman would then be convinced to accompany him through a bushy area where he would allegedly rape and rob them.

The state closed its case on Wednesday last week.