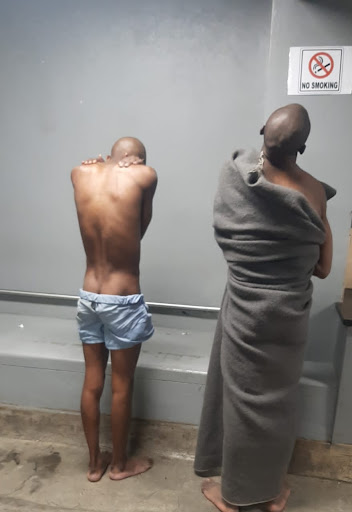 The department of correctional services said Malibongwe Masondo and Luvo Mbali escaped from a prison courtyard by making a hole in the fence.
Image: JMPD via Twitter

The two men who kidnapped a four-month-old baby during a home robbery escaped through a hole in the fence at Leeuwkop prison in Bryanston, the department of correctional services said on Friday.

Department spokesperson Singabakho Nxumalo said Malibongwe Masondo and Luvo Mbali escaped from the centre’s courtyard by making a hole in the fence.

Masondo was serving 30-years for rape and robbery while Mbali was serving a 10-year sentence for murder.

“The department of correctional services (DCS) is investigating a gross security breach.

“Although the two inmates are back in custody, DCS is seriously disturbed by the incident and will ensure the investigation leaves no stone unturned,” Nxumalo said.

Shortly after their escape on Thursday the two men committed a home robbery in Beverley, a suburb in Fourways, north of Johannesburg.

The men gained access to the home from the back.

Johannesburg metro police department spokesperson Wayne Minnaar said a domestic worker saw them from inside the house and locked the back door.

“It is alleged the suspects kicked down the door and a second door inside the house,” he said.

Fidelity CEO Wahl Bartmann told TimesLIVE the owner of the home fled to the bathroom and called her husband and Fidelity Services. He said when reaction officers arrived on the scene, the two men threatened to harm the baby if they came inside.

“They called for backup. The suspects, armed with knives, abducted the homeowner's baby and ran towards the Jukskei River. An Uber driver witnessed the two suspects carrying a child disappear through the bush towards the river,” he said.

Bartmann said officers called for additional backup from estates in Kyalami, Helderfontein and Dainfern. The officers went to the river and searched in bushes.

“Shortly after a report came through that two suspects with a baby had hijacked a vehicle in Helderfontein,” he said.

Minnaar said while on patrol near Diepsloot Mall, two metro police officers spotted a white Toyota double cab driving at a high speed. The bakkie crashed into a ditch at R511 and Plum Street.

The two men were arrested on the scene. The four-month-old girl was reunited with her family.

Nxumalo said the two men will face charges of kidnapping, hijacking and escape from lawful custody.

“The law will take its course in dealing with the two inmates and DCS will be working closely with the police to ensure justice prevails for the victims who were tormented by these two while on the loose.”