Animals die in fires raging through farms in Northern Cape 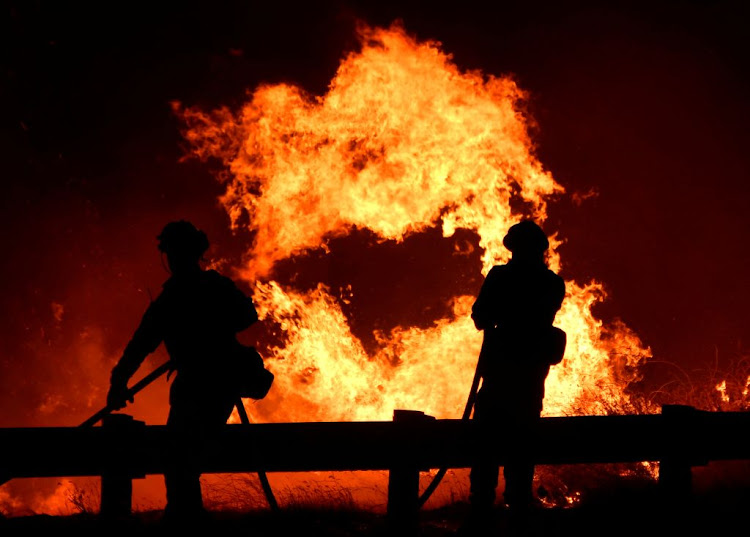 Northern Cape farmers are reeling after 100,000ha of land was razed in a fire on Friday night.
Image: Gene Blevins/Reuters

Scores of farmers in the Northern Cape are counting their losses as more than 100,000ha of land was razed in a fire on Friday night.

Farmers said many of their animals perished in the flames.

According to Janine Byleveld, who runs Northern Cape Agri Risk Management, it is unknown how many farmers were affected and the cost of the damages because the fire was put out only on Sunday evening.

And, worryingly, there were reports of a new fire having started in the Koopmansfontein area on Monday.

Byleveld said drought from the previous years and the relentless wind caused the huge blaze, which started in Koopmansfontein, northwest of Barkly West, and stretched to Kuruman, some 120km away.

Byleveld described the situation as a “disaster”.

“We are still busy collecting information because the fire burned until Sunday, so most farmers are out inspecting their land. This area is affected by seasonal drought but we had good rainfall this year...  Hopefully we get early summer rain. Luckily things like fire can be fixed, unlike drought.

“We are calling it a disaster. We have seasonal fires at this time but not usually this many.”

Last month, a fire in the Kuruman and Kathu areas razed about 150,000ha of farmland. Byleveld said they were still counting the cost of that fire which affected more than 50 farmers, burning 90%-100% of their land.

Byleveld said the suspected cause of the fires were “natural”, such as lightning, and “negligence”.

“Wind is fuel to fire so, for instance, negligence could be a farmer working in the veld with an angle grinder [which sparks a flame] or somebody passing along the road smoking … and it's dry,” she said.

She said now was a critical time for Northern Cape farmers who rear cattle and desperately need to graze - with that grazing land in the southern part of the province having all been burnt.

“We and other farmers were donating fodder after last month's fire. We've started again collecting for these farmers because cattle need to eat everyday. They can't wait five days for insurance to pay out,” she said.

She said there was a huge fire last year in October in the Boshof, Daniëlskuil and  Warrenton area which also razed over 100,000ha.

“This started [the feeding] initiatives from Agri. This past year there has been an increase in big fires.”

On Monday, Francois Weideman the Northern Cape Agri co-ordinator was unable to update TimesLIVE on the weekend's fire because he was busy fighting a new fire in the Koopmansfontein area.