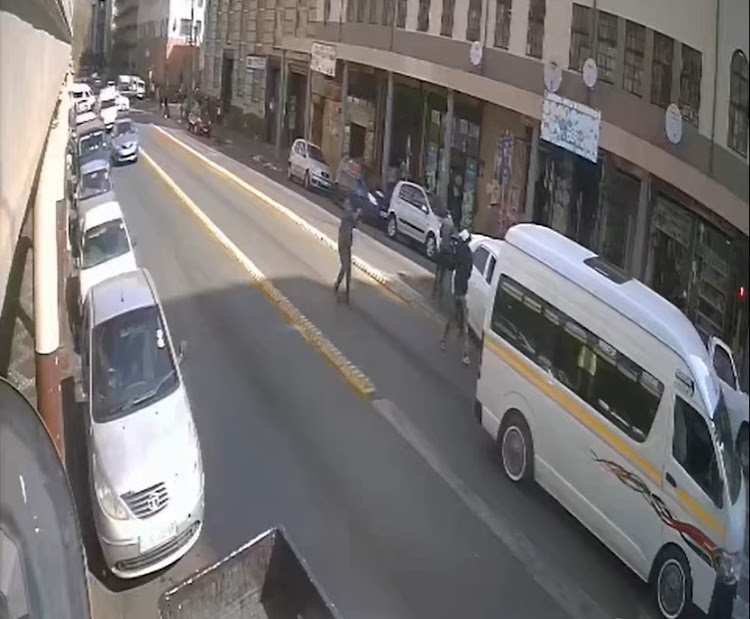 The victim was travelling in a white Toyota Corolla in Troye Street on Monday when he came to a halt at a red traffic light.
Image: Screengrab of video

A taxi driver has been hailed as a “hero” by social media users after firing shots at suspected robbers who attacked a motorist in the Johannesburg CBD.

Police spokesperson Capt Mavela Masondo said the victim was travelling in a white Toyota Corolla on Monday afternoon when he came to a halt at a red traffic light.

“Suddenly four or five suspects approached him, broke car windows and pointed firearms before robbing him of an undisclosed amount of cash and a cellphone,” said Masondo.

He said the car rolled forward and bumped a Toyota Quantum.

VIDEO -A taxi driver fires shots to save an Uber driver who was getting Hijacked by criminals in Johannesburg CBD.

“The driver of the Quantum got out to check only to be threatened with firearms by the suspects. He drew his licensed firearm and fired shots in the direction of the suspects.

He said the taxi driver was shot in the leg and treated at the scene.

Cases of armed robbery and attempted murder were opened.